What’s the Problem with Spanking? 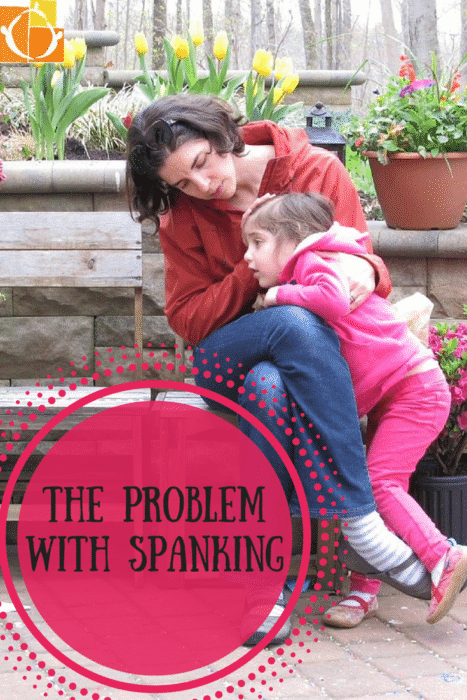 It seems to me that there are three core questions to ask about spanking. The first is the broader question, what’s the long term effect of spanking on children? The second is, does physical punishment really work to control a child’s behavior in the moment? And there’s a third important question, seldom asked but certainly relevant and a good place for us to begin: what does spanking do to us as parents?

What does spanking do to the parent?

Most parents feel angry when they spank. An angry person is determined to assert control in a situation, and doing something physical feels like it will bring some relief. So spanking a child may make a parent feel temporarily righteous, back in control, or vindicated. It may give a parent the sense that he did not allow himself to be victimized.

However, there are very few parents who have gazed at their newborn child and thought, “I can hardly wait until I can spank my beautiful daughter!” or “When he gets a little older, it will be so good to have the chance to spank his little bottom.”

We know that these statements are absurd! When a parent feels he has no alternative but to spank, he is acting out of desperation: he doesn’t know what else to do. It wasn’t part of his original plan for relating to his precious child.

Parents have to steel themselves emotionally in order to follow through with a spanking. We have to harden our hearts. Or, perhaps more often, a challenging situation that we’ve been trying hard to deal with finally sends us into emotional badlands; where love can’t be felt. And there, we feel that our child has driven us to spank—it’s their fault, not ours, that our hand hit them.

I don’t think parents like to spank. And the more often parents spank, the less rewarding parenting feels. Spanking is a road to a place they don’t choose, but parents who spank are often too stressed, both by “having” to spank, and by the other pressures in their lives, to find their own inner compass that says, “Change direction!”

Does spanking control a child’s behavior in the short term?

When a child is spanked, his or her limbic system (the emotional center of the brain, and the part of the mind that mediates learning and understanding) goes into alarm mode. The child’s brain clearly perceives spanking as an occasion of danger, and responds accordingly.

For the child, it is an experience of being small and unable to control an overwhelming and unpredictable force. In this state, his mind can learn nothing. His prefrontal cortex, the center of reason and judgment, shuts down. Hence, a child’s behavior during and after a spanking is not thoughtful behavior. It’s reactive.

The “control” that the parent is striving for has everything to do with fear, and nothing to do with teaching, learning, or a child’s understanding of concepts of right and wrong. What the child “learns” is that, seemingly out of the blue, for reasons he can’t fathom, he has been hit or hurt by a person who loves him. This is a confusing lesson indeed.

Spankings are perceived by a child to be random acts of violence. Over time, they create a wedge of fear and resentment between child and parent. The more time a child spends with his mind shut down by the fear response that physical attack brings, the more reactive his behavior becomes. A vicious cycle results: a fearful child becomes aggressive or withdrawn, the parent spanks in response, the child becomes more frightened, and loses control of his own behavior more often.

So, though a spanking may result in a quieter, more cautious child for a few hours, that apparent peace has a high price. A child’s sense of safety, and with it, his ability to reason, to cooperate, to learn, and to trust are all eroded with every spanking—so is a child’s openness to love from his parent.

What are the long-term effects of spanking?

Many studies have been done on spanking in the United States and in other countries. The evidence is clear that the effects on children are negative. The American Academy of Pediatrics and a long list of other professional societies take a clear stand against the corporal punishment of children, both at home and in the schools.

Studies show that even a few instances of having been hit as a child are associated with more depressive symptoms in adult life (Strauss, 1994; Strassberg, Dodge, Pettit & Bates, 1994). A landmark meta-analysis of eighty-eight corporal punishment research studies of over six decades showed that corporal punishment of children was associated with negative outcomes, including increased delinquent and antisocial behavior, increased risk of child abuse and spousal abuse, increased risk of child aggression and adult aggression, decreased child mental health and decreased adult mental health (Gershoff, 2002). It has also been shown that corporal punishment has an adverse effect on a child’s cognitive development.

What is a parent to do instead?

We parents need more support than we get. It’s not right that we must repeatedly face parenting issues that drain our patience, without any idea of how to find help. It’s not right that there’s no dependable way to restore our emotional balance, when we’re beyond frustration. It seems to me that spankings point to our need for more help, more kindness in our own lives, and less worry about our futures and the futures of our children. We want the best for them, and we need better help for ourselves, too.

We parents need to listen to each other’s stories, to hear each other out. We need to hear how many troubles an exhausted or frustrated parent has seen. We need to offer each other appreciation for the things we do well. We need someone we’ve built a measure of trust with to hear all about our anger, our worries and our desperate moments.

It’s remarkable how much difference the chance to be listened to can make in a parent’s life! And then, we need to move close to our children, instead of attacking them for their troubles.

It’s an unusual thing to do, but to move close, set a limit, and then stay with a child while the passionate feelings pour out is far kinder than punishment. It also helps a child learn from the limit that was set.

His mind flushes corrosive emotional tension out while you keep things safe around him. And in the end, he knows you love him. You listened to him. That drive to cross the limit again is gone. You’ve connected with him. His mind has moved from an “I don’t care what they say!” state to feeling like part of the family again.

Staylistening—listening until the child’s feelings are spent—helps a child actually learn from mistakes and poor judgment. At the end of a good cry or tantrum that’s supported by his parent, a child can make sense of what just happened. He understands the limit that was set, and that limit doesn’t leave lingering resentment or anger.

Short range, it helps a child rebuild his connection with the parent who listened to him, so his mind works again, right here, right now. And it gives a parent a way to exert real power when a child has gone off track. The parent uses the power of his caring, and the power of his good judgment, to retrieve his child from behavior that wasn’t working for either of them.

Staylistening in action: here’s how it can work.

It’s been really hard. Our four-year-old son has been extra demanding lately. He has been asking for what feels like constant attention and in often unflattering ways. Requests for help come out as demands. He also has been intensely rigid. The shoes aren’t tied right. The hood isn’t just so. All of which have triggered down-on-the-floor tantrums with wails and flailing legs and arms. And they have come some days endlessly one after another even with all our many hours of focused attention.

To add to it lately, he has started hitting his sister, me and my husband. He only hits at home and never has hit friends or other relatives.

This morning we could see it coming again. As my husband and I both can feel triggered by the intensity of our son’s rage, especially when it was directed at us, we decided until things shifted, we would work together when we could to help our son through his big feelings. This morning was our second attempt together at helping him; the previous night we had stayed together as well.

This morning, my husband set the limit and brought him upstairs. I joined him and together we stayed with our son while he flailed on the bed, screaming at us. He didn’t want to hit a pillow or any other object; he wanted to hit one of us, with our faces being the prime target. We kept ourselves safe and reminded him that he was safe. As the feelings intensified, he complained of not being able to breathe when it was clear to us that physically he could breathe. I think that he was having some kind of emotional flashback. We told him we could see he was breathing and that we would make sure he continued to breathe just fine. He pushed hard against us with all his strength. It went on like this for what felt like forever.

Then he stopped, just stopped and popped up his head. He nuzzled close to me and, with no forethought, I made a circle out of my arms which our son took as an invitation to squirm his way through the circular opening in my arms. Making it safely to the other side, he came back triumphantly to squish his way back through the circle again. He asked to do it again and again. “Tighten your arms this time” he’d request. Each time he made it through he’d smile. Back and forth he’d go between his dad’s arms and mine. Soon his sister, hearing his giggles, joined in and we all had a good laugh on the bed.

We needed it. We made it through. I wonder whether, that whole time, he had been working through feelings from his birth. We’ll never know, but he was sure enjoying getting through a tight spot again and again at the end! And he was easygoing for the rest of that day.