My Story: How Staylistening Helped My Family and Inspired Me

When my daughter was born in 2010, the first weeks with her were blissful. I had a 6-hour water birth; we were easily able to establish a good breastfeeding relationship. But after 10 days at home, her doctor told us she needed to wear a restrictive hip harness around the clock for five weeks. This was a shock for me, and it triggered many painful emotions due to my own childhood experience with a hip harness. I still felt traumatized by having had to wear a harness for 6 months, starting when I was 3 months old.

Because of the harness, my daughter needed to wear nappies and clothes all the time. We could not hold her naked against our skin anymore. The harness was like a tight suit that covered half of her legs and feet as well as her whole upper body.  Our baby’s personality changed immediately: she cried almost constantly. We asked if we could loosen the harness, but it was not possible. To correct her hip, she had to have her legs spread apart and her body covered.

The first days were horrendous. It felt like she did not sleep more than 15 minutes at a time, and that was only when she was in a moving car. Then one day, in a baby shop library, I stumbled across a book called The Aware Baby by Aletha Solter. Solter states that tears are the healing mechanism in every human being. I felt right away that this would be the key to helping our baby through her difficult situation.

We started Staylistening with our little girl right away. It just felt so right. It was so much better than rocking her, distracting her, breastfeeding her every hour, or constantly moving around. She cried a lot, sometimes for hours in between sleeping and feeding times. I always made sure that she was comfortable, fed, and dry, and then I would pay attention to her while she cried in my arms, looking at her and sometimes speaking softly to her. She would mostly cry and then fall soundly asleep, waking up to cry a bit more or to gaze deeply into my eyes. Sometimes the cry would end suddenly and we had time to play a bit. It was such a gift to me to be there for her in that way.

Later, when the harness came off, she still cried quite a bit. The cries were an amazing source of connection: by then, because I had listened to her so well, I could mostly identify based on her volume and tone of voice what she was working on—whether it was frustration, fear, anger or sadness. I was in awe that such tiny babies could express such a range of emotions. The deep connection we forged during these times connected has remained. Now, at age 4, she is a delightful child to be around most of the time, and lots of adults comment on how relaxed she is.

In learning how to Staylisten with our child and get through that difficult time, I had a lot of help. I had a Listening Partnership as well as caring listening from an experienced counselor. When my partner came home from work, I would go into another room and cry and cry, which helped me find the emotional space to be able to listen well to my baby. I would not want to have missed this time, when I learned such valuable life skills, and which was filled with so many intense feelings and so many lovely supportive people. I have used Listening Tools often since then.

In 2013, I took the Parenting by Connection Starter Class in preparation for applying to be trained as an instructor. Becoming an Instructor of Parenting by Connection has been a dream come true. I am so passionate about this work and this way of being with children, and not just children but people in general. I see such a need in the world for people to be listened to and allowed to “just be” rather than trying to find connection through “doing.” And it gives me so much joy to watch people transform their relationships with their children and become more connected and less strained and stressed.

Emotions are our friends. They are nothing to be afraid of, nothing to push away. They should not make us angry. In fact, emotions are like children: when we hear them and understand them, they create space for aliveness, creativity and clarity. 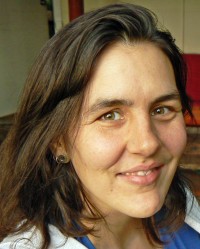