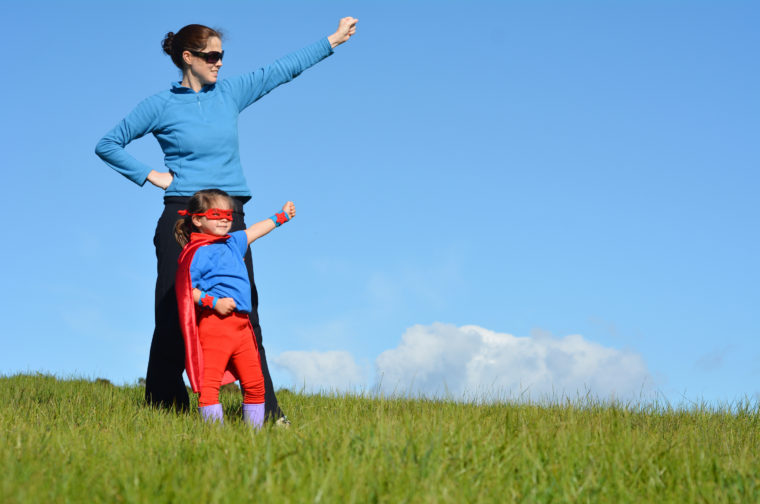 It was summer when my 4-year-old daughter discovered a real fear of wasps. They would buzz around our yard quite a lot during the day and it got to the point that she refused to play outside, even on a new swing set.

Although she’d always felt spooked by spiders and other bugs too it was the threat of a buzzing wasp with its sting that was most scary for her, and I admit, I didn’t quite know what to do.

One summer morning, I was outside with her younger sister and we managed to coax the older one outside. Tentatively, I started a game where I became a buzzing bee.

I flew around buzzing all around but when I got close to the girls, I started acting really scared of them. I got some shy smiles. Then came the giggles. Soon after, they began chasing me. All of a sudden I was a fearful wasp buzzing and begging them, “Please don’t swat me, please don’t squish me.” I made quite a show of my fear, screeching and squealing as they chased me around the yard, both of them laughing hard at my silliness.

I could see my 4-year-old get a real kick having power and control over my – or should I say ‘the wasp’s’ – fear.

We played this game whenever she was reluctant to come outside, many times over the summer, and soon she became more comfortable playing outside. The fear had subsided and it wasn’t long before she was swinging away on the new swing-set.

And then, one day, she was stung by a wasp. Moving swiftly, we took care of her right away, holding a raw onion to the sting and following that up with ice. Within minutes, she said she was feeling fine.

Despite the sting, those buzzing wasps just didn’t pose the same threat as before. My daughter went right back to play and she didn’t even ask for a swatter.

The magic of Playlistening lies in the fact that the child is empowered as the parent takes a lesser role. This allows humor, decisive action and control to allow children to play their fears by planning possible solutions – like squishing the wasp – as well as a good dose of feel-good laughter that releases pent up tension and can, over time, dissolve fear.

Summer is full of potential fear situations for children – think swimming pools and splash pads, sharks and whales at the beach, sand, and new situations including classes and summer camp. Try using the power of play to ease these tensions and build greater connections with your child. Then all you’ll have to stress about is who gets the first lick of ice cream…

Here are three more Playlistening ideas to try this summer. Let us know about the games you play to vanquish fears away.

When the Summer Routine Changes Everything:

Summer’s change in routine can be unsettling and manifest in extra whininess. Try Whiny-Bugs: Say: Oh my, I see you have a case of whiny bugs again. Not whiny bugs – I must find them. Then proceed to discover these pesky creatures everywhere that turn whinging into wiggles and giggles.

When the Pool Seems Scary:

If your child is scared to dip his feet in or put his head under water, try stepping into his shoes. Splash your feet in, and then run out horrified. “I can’t, I can’t. That water is WET! Urgggh! That water is cold! Yuck! Return again and again. Pretty soon he’ll be at least splashing, even if he doesn’t get all the way in.

When They Don’t Want to Leave for Camp:

A whole gaggle of new teachers and experiences can get kids on edge. If yours is having trouble saying goodbye try a role reversal game. (Allow extra time for this). Announce you are leaving and say “I hope no-one tries to block my way,” or “I hope no-one tries to hold on to my legs to stop me going.” Laughter as they pull and tug should diffuse the fear feelings.