It’s OK to struggle. Every parent has struggles, and every child goes through struggles, too.

It’s important that we remember that effort and failure are as much a part of learning as ease and success. Our culture creates the illusion that ease and success are the norm—that smooth going is good going in every case. Our lives are made more difficult by this incorrect assumption. When days go well, it is a treat and a benefit. But rough going doesn’t necessarily indicate that something is wrong. Our society throws up enough barriers to being kind, supportive, and connected with each other to cause rough going often.

In particular, children who have struggles 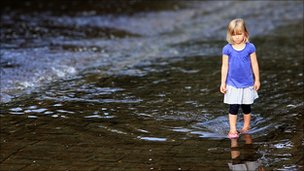 are looked upon as exceptional, when actually, almost every child will go through periods of struggle as he learns and grows. What Parenting by Connection offers is a way to capitalize on the moments of struggle that ignite big feelings. Those moments are full of promise.

In a struggle, the child or grownup eventually comes to the end of his ability to think. The roadblocks go up on every path to a good solution. Internally, we think that at this moment, the prefrontal cortex—the logical, problem-solving part of our brain—shuts down.

If someone offers closeness and support, or in the case of a grownup, if the person can bring to mind someone who has been supportive in the past, a healing process begins. Feelings burst out. As the feelings are shed, tension is released. The feelings take over the mind for awhile, as the listener provides a steady hand and the promise of safety. It’s a vulnerable time, a time for protection against time pressures and expectations of logical behavior.

There’s power in the partnership between child and parent at these moments. The child feels things fully, and the parent listens. The child struggles and the parent says, “I’ll stay with you.” The child has no perspective, but the parent keeps it for him, “I know you can do it,” or “You’ll get a turn later,” or “It’s time to pick up the blocks.”

When we parents struggle, a listener can make a huge difference. We can stop trying to figure out what to do, and simply notice what we feel. We can laugh, we can cry. We can have some protected moments during which we're not trying to fix anything. The listener holds the perspective, “It’s good you’re tackling this. You will figure this out. What a caring parent you are.” Meanwhile, we cry away the feelings that we shouldn’t be struggling like this.

Here’s an anecdote about a child who has had lots of big cries about gaining physical skills:

She began, as a toddler, by having huge cries about not being able to get her shoes on by herself. She would try, fail, and cry over and over again. When her Mom tried to help her, she would reject the help. She preferred to struggle.

Her Mom says that now, at the age of five, she knows her daughter well enough to expect that every time a physical challenge appears, her daughter will want to learn, feel like she can’t, have a good cry, then succeed. Her daughter is growing up able to head toward struggle without hesitation or shame. She’s sure her Mom will back her.

“My daughter and two of her friends were playing outside of our house on the stucco railings next to the stairs. Her friends effortlessly climbed on top of the railing and slid down, then jumped off. My daughter wanted to join in, but could not figure out how to slide down by herself. She began to cry and cry. I came next to her and said that I was sorry that it was tricky for her. I offered her my help, but she refused, crying even harder. “My body can't do it,” she sobbed. I continued to remain with her while she cried. Eventually she tried it again, and will a little help, she did it. Then she did it again, by herself. She was elated!”

—a mother in San Anslemo, California

We at Hand in Hand hope you will remember that you are good, that your children want closeness with you above everything else, and that the struggles that you and your children may have are worthy struggles.

You nurture children: Your intelligence couldn’t be engaged in a more important endeavor!