Got A Child Who Refuses To Practise? Try A Special Time Sandwich

Whether it's music, homework, sports or another skill, when a child refuses to practise it can be frustrating. You want your child to progress and increase in confidence, as well as skill. How can you help? In this post, one instructor describes how her child went from plugging their ears whenever she suggested practising to happily asking to do more. It all started with a "Special Time Sandwich." If you are tired of fighting about practising, give it a try.

When my son was 4.5 years old, he needed to see a speech pathologist for a difficulty he had with his pronunciation. At the end of the first session I felt light and hopeful that it might really help. We were sent home with some exercises to do.

My child refused to practice

Then came the challenge: getting my son to practise!

Well, I tried everything. I tried making the exercises fun but he hated it anyway. He put his fingers in his ears and made silly noises.

I tried some Playlistening – getting his teddies to do it, pretending it was a really stupid idea, and putting them in the bin.  I got a few laughs, but it didn’t help him want to do the exercises.

Next I tried Setting Limits—first playfully “Oh, yessy, yes, yes, we’re going to do our sounds practise,” and letting him run away and giggle as he hid from me.

That didn’t work, so I became more serious. “We’re going to do our sounds practise.” All he would do is say silly words and throw our sheets of paper away. I was beginning to lose my patience and with it, my ability to think well.

How on earth would I get my child to practise?

It was time for Listening Time.

I vented to my Listening Partner about my frustration and let my feelings of overwhelm and confusion flow.

How on earth was I going to get him to practise?

This was just too hard. For the first time in four years of using Hand in Hand’s parenting by connection ideas, I was thinking I would just have to resort to the rewards approach the speech pathologist had suggested. I really couldn’t see any other way.

I started doubting my parenting philosophy

We had to practise or the therapy would be a waste of time. I thought that maybe, just this once, I would have to let go of my beliefs and do whatever it took to get the practise done.

Finally! I found a tool that helped

Just as my mind was starting to think about what kind of rewards system to set up, another idea flashed through my head. I found myself saying to my son, “Okay today we’re going to have a Special Time Sandwich.”

Well, much to my amazement, when it got to sounds practise he was fully engaged. He tried really hard to do the exercises. I could hardly believe it!

We tried the Special Time Sandwich the next day and the same thing happened. He was fully part of the practise and even had ideas like “Can you hide the sound cards around the room and I’ll find them and say the word.”

The next day he brought his teddy and made it do the practise and get everything wrong. I started to hear him practising the sounds by himself during the day. He would ask me questions about words like “Is it skittle or stittle?”

Soon my child was asking to practise

After about five days of this he came up to me at the end of the day saying, “Could we do some more sounds practise today? I really enjoy it.”

He wasn’t asking for Special Time, just the sounds practice!

And, interestingly, he became increasingly frustrated when he wasn’t understood. He started to get quite angry and start crying when I couldn’t make out his words.

This was loud anger that I found quite hard to listen to. My heart ached for the frustration he was feeling.

But I did manage to listen and the anger soon turned to tears.

His speech improved in leaps and bounds

He made fantastic progress. The speech pathologist was impressed – and so was I! His speech came along in leaps and bounds.

I think what happened was that he could feel all the effort I put into helping him try and practise and he kept letting me know he just couldn’t do it in the ways I was suggesting.

I even have a hunch that if I’d have dived straight in with the Special Time Sandwich it might not have worked. I think what was most important was him needing to feel that I was on his side, and that I was partnering with him. Trying other approaches first had laid the groundwork.

Got a child who refuses to practise? Try this approach with homework, sports or any area where your child is resistant to try or learn something new.

Get your free guide to Special Time

Discover how this parenting tool can dissolve power struggles, bring you closer and help your child's confidence grow – in as little as five minutes a day.

Get your free guide to Special Time 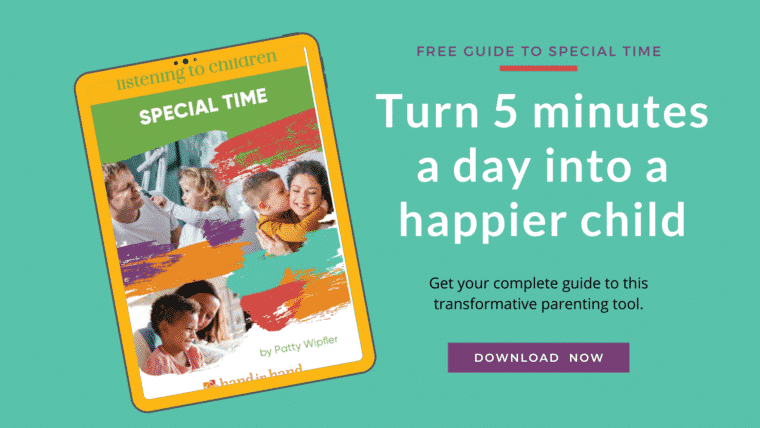