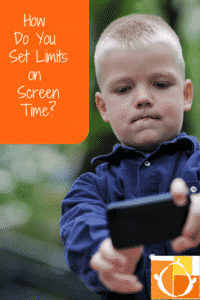 As my son grows older the draw towards video games is getting stronger and stronger, and so is the family struggle over them. I started to notice the tension and frustration around video games increasing and began to set limits, but it did not seem to be quite enough. I would set a limit, and he would express his feelings, but never quite follow them all the way through, and for a period of time it continued as a daily negotiation.

He began suggesting playing video games during our Special Time. I hesitated at first, thinking that it was not a good use of our quality time together, and worried that it might serve to encourage his constant desire to play them. But I told him it was his choice, and so we snuggled up real close under some blankets to play games on my iPhone. The first time we did this, he wanted to play the whole time and have me watch. I simply offered as much connection and enthusiasm as I could muster during the time. Then the timer went off, and I told him it was time to stop and put the games away. I moved in close to set the limit, and I held my hand over the screen on the phone. He erupted into a heap of feelings, insisting he had to play one more round, and angry that Iwas making him shut it off. I sat and stayed close to him while he kicked and yelled and offloaded his frustration. After he wound down he was flexible enough to do other things.

This same scenario repeated a second and third time when we did Special Time.
He chose to play video games, and after the timer went off I would ask him to turn it off and he would offload his feelings about it. After a few of these, I began to notice shifts in the way the Special Time was going. He was having me play more and more of the levels with him, and becoming much more flexible about turning it off, as well as not asking to play any more for the rest of the evening.

These past couple of weeks he has wanted to play video games during his Special Time, and I have come to really enjoy it! We snuggle under a blanket together, and he facilitates us switching turns back and forth on the different levels and challenges of the games we play. It feels like we are really playing together and we laugh and get excited and give each other “high fives” to celebrate good moves all the way through. When the 15 minutes are up it has been me who says, “OK, we’ve gotta do one more round!” It really does feel like connected play. Then when it is time to stop he is flexible and ready to shift to the next thing. I have also been noticing that he is not asking to play as much,
and when he does and I set a limit, he can cooperate with my limit.

Learn more about setting limits on screen time in this free instant-access teleseminar.