So these power struggles are inevitable. They spring from what looks like competing interests of loving people at very different ages and stages. The fact that you and your child get into power struggles means that you and your child are each doing the most appropriate thing you can think of. Your job is to be the parent, keeping life safe and somewhat ordered. Your child’s job is to keep from feeling helpless in the face of so many decisions that are out of her hands.

Solving problems by connecting in play

There are easy, fun ways to help dissolve the struggle through play. The following approach is based on the idea that when your child feels connected to you, loved by you, and safe, she won't feel so inclined to oppose the things that must be done. She’ll want to cooperate with reasonable and respectful requests.

Sometimes, a child’s opposition springs from not feeling close to you at that moment. Even though you're available and loving, she may not be able to feel it at the moment, because she's been alone in sleep, or without you at day care or school, or has watched you pouring attention toward her sibling. Or, she may be digging in her heels because she has had some bad experience that is jangling in her mind, making her feel mad, sad, or frightened.

In either case, your child can't cooperate because she's got feelings that have come between you and her, and she can’t remember what it is like to feel good and close. So, to reconnect with her and to begin to dissolve the power struggle between you, try playfully taking the less powerful role.

For instance, if your baby refuses to allow you to feed her with a spoon, you can give the spoon to her and let her feed you. Let the food dribble down your chin when she misses your mouth. She will giggle and enjoy her newfound power.

If your child refuses to dress herself, you can spend a few minutes saying, “Want this sock on?” with an eager expression. When she says, “No!” you can say, “OK, away with the sock!” and throw it up in the air and across the room. Then you ask, “Want these pants?” eagerly. When she says, “No!” you say, “OK, away with the pants!” and throw them up high, perhaps so they'll land on your head. If your child won't brush her teeth, you can yelp and complain while she brushes your teeth over and over.

When you are lighthearted enough with games—playing the goofy “victim” or the poor, surprised target of your child's “plot to get you”—your child will laugh and laugh. She’ll want to play the game many times. 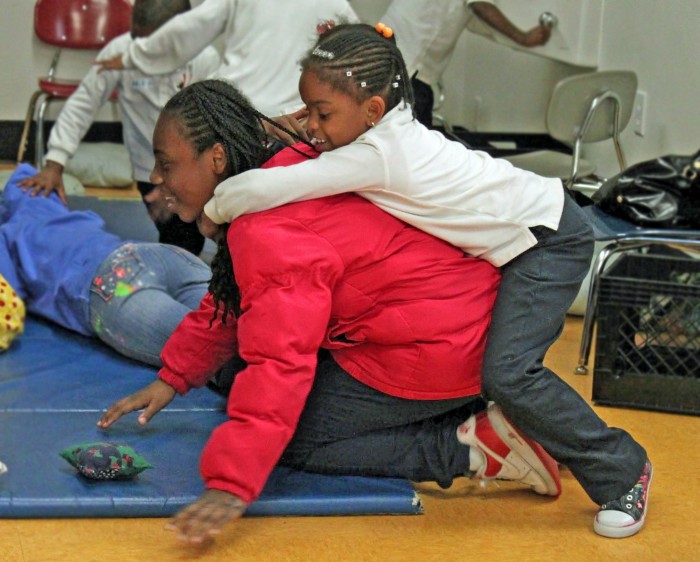 This is progress. The laughter helps dissolve her feelings of powerlessness, and the distances she feels from you. It helps connect the two of you in good fun.

These kinds of games are silly, yet deeply sensible. You play the one having trouble, and your child plays the one totally in charge. This reverses the power structure for five or ten minutes, or longer if you have the time. Your child sees that you love her, and sees that you don't always insist on being in charge of everything. She benefits from the wonderful release laughter brings. After playing a bit, you can then say, “OK, we do need to do ____ now,” and you are much more likely to have a child who wants to follow your lead.

Sometimes, after you've had a great playtime centered on an issue the child has been balking on, you'll set out your expectations again, and your child will have a big cry about still not wanting to brush her teeth or eat her food or get dressed. This is to be expected. She's taking one more step to dissolve the feelings of powerlessness that get triggered by your requests. Stay close and listen. She's offloading big feelings that, when gone, will help her see you as her ally instead of her warden when you are asking for cooperation from her.

Here's how it can work:

When my son was about twenty-one months old, he started to hate having water poured over his head when I washed his hair in the bath. He would scream and scream every time, even when I was meticulously careful not to get any suds or water in his eyes.

After a few weeks of this battle, I remembered what Patty told us about Playlistening. One night, during his bath, but before washing his hair, I took the special hair-washing cup and (discreetly making sure it was empty first!) held it upside down over my head. I shrieked, pretended to cry, and shook my head back and forth.

My son howled with laughter! He kept handing me the cup over and over again with a big smile on his face, and he laughed uproariously as I feigned intense distress. In between mock cup-pourings, I would smile at him to let him know I was okay. Gradually my hair got wet from the traces of water in the cup, and he was fascinated to touch my wet hair and rub the top of my head, which was now quite wet.

Later in the bath, when I washed his hair, he clearly did not enjoy it much, but he sat still and did not actually scream. Over the course of the next week or so, I always preceded washing his hair with play-washing mine, complete with loud shrieks and cries. He continued to laugh with abandon, and touch my wet hair with fascination. Now he has taken control of the cup, and insists on being the one to hold it over my head!

It took three or four baths, but now he does not object to his hair being washed. In fact, what was once a torture session for both of us is now one of his most gleeful games. In the evening when I say, “Bath time!” he runs into the bathroom to get the cup, and runs over to me with it, laughing and holding it out to me.

—a mother in Pacifica, California