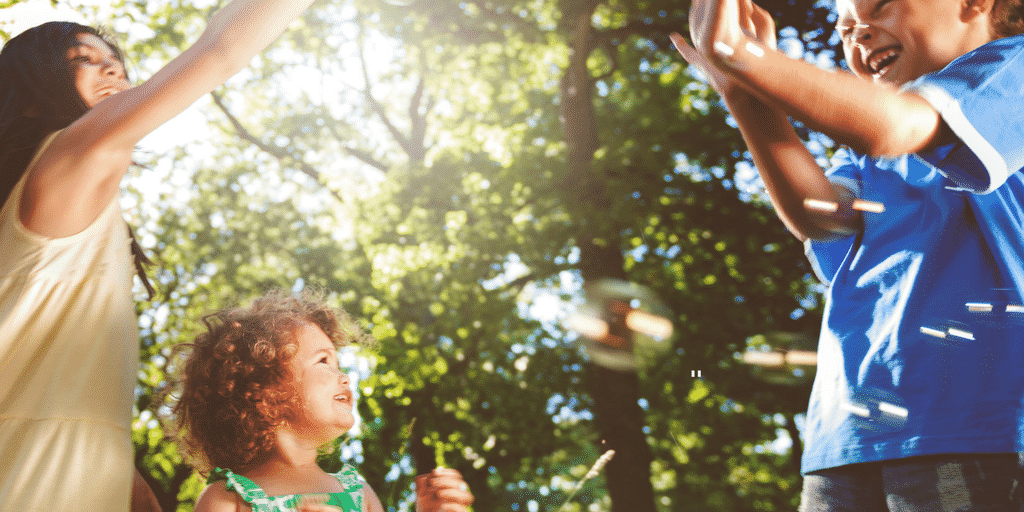 What do you remember of the lazy days of summer when you were a child? What were the best times? What did you look forward to all year long? What new experiences did you have that taught you new things about the world, your talents, and yourself?

For parents in two-job and three-job households, the anticipation of the fun of summer with kids is lost in the pressured rush of figuring out child care, camps, and whether or not a vacation is financially possible this year. But it’s important to think, for a moment, about what opportunities summer can bring—both conventional and unconventional!

The chance to play all day, every day is wonderful for children. They need those long days and weeks with no pressure to perform, pass tests, or prove themselves, except by their own choosing. Play is the natural habitat of children. At play, they are using all their minds and their hearts to learn and grow.

We can relax some of the rules and worries we usually live by to let fuller play happen. Having water fights in the yard, playing hide and seek at dusk in the neighborhood, staying at the park until it’s really dark, making a mud hole and some really thick “chocolate” cakes in it, making a tent from a sheet in the back yard as a hideout, spitting watermelon seeds as far as you can—these are the kinds of play that don’t require electricity, don’t require any purchases. They just take imagination and a “Sure, that sounds great!” attitude from a parent.

Any play that includes laughter (and doesn’t include tickling or making fun of someone) is play that helps children grow strong.

They gain confidence in the goodness of others as they laugh. They feel like there’s genius in the air when they laugh. And, chuckle by chuckle, they shake loose from their fears and worries.

Use summer's off, outside to explore things most of concern to your child.

When you have a toddler nearly ready to use the toilet, you can allow him or her to roam the back yard naked, learning to master bodily functions in a place where there can be no “accident.” You can pee with him in the bushes, and laugh together as the leaves dance.

When you have a child who’s afraid of the dark, you can sleep outside with her when the moon is full, to see what it’s like to have it be light all night long without a night light.

When you have a child afraid of the water at the pool, you can try to stick your toe in, and then run playfully away, “afraid” of the water, so he can laugh while you “borrow” his difficulty for a half hour or so.

When you’ve got a child who chews her fingernails, you can grab a puppet, and let the puppet want a nibble, getting some laughter going as your child denies the poor puppet a taste.

Summer means that fresh new things can happen, usual boundaries can flex, and parents can relax a bit more around play that they wouldn't perhaps allow when life has to be more structured.

Some summer days can lose their sparkle. Children feel listless, and say they are bored. You’ll notice that there actually are things they could do, and people they could play with, but they are missing that sense of adventure that can turn a simple piece of paper and a scissors into an experiment with hat making, or airplane crafting, or cut out design. The feeling inside of them is actually the problem, not any lack of things to do.

As far as I can tell, when children say they’re bored, they really are telling you that they don’t feel connected enough to feel hopeful. So rather than become irritated that they don’t appreciate all the things they have, or all the time you’ve spent trying to make them happy, move in close. Lie down with them, or next to them, where they languish. Don’t try to solve the problem of what to do. But do look pleased to be with them. Do cuddle. Do just stay there with them, until they can absorb your presence and your attention.

If you want, after several moments of just lying with your child, paying attention but not prodding, you can begin musing about things they could do. But be silly in your suggestions! Suggest things like:

Any silly idea will do!

You’re not trying to solve the problem of what to do. You’re trying to get a bit of laughter going, and then a bit more, and then even more. While children are laughing, the bridge between you and them rebuilds. Your silly ideas, and the release of laughter, jumpstarts their minds. Soon, they know what they want to do again.

If not, they become irritated with you, and your presence becomes more and more of a bother. They work themselves into a good cry, which is the other way children clear their minds of emotional sludge, and regain their enthusiasm for life.

Stay. Listen to what a dumb day they are having, and how you are a stupid parent because you won’t let them x, y or z. To really get the awful feelings out, they need a safe person to serve as their target. That would be you! You don’t have to believe that this is their full and final evaluation of your parenting. It’s not. It’s just what they need to do to get the tears going strong, so they can come back to you and feel their love for you again when they have finished.

Read more on how to bust boredom using connection tools

For children, the best thing about vacations is that their parents aren’t so busy. The prolonged contact (which often starts in the car or on a plane) gives children’s emotional minds a sense of greater safety. This, in turn, can translate into children trying to set up chances to heal from the harder times they’ve had. Feelings bubble up from a

child’s emotional memory that were stored there during times of forced separation, strict boundaries, or tense parent preoccupation with adult issues.

When the family comes together and spends extended time, a child’s limbic system, the seat of her emotions, gets the signal that life is better than usual. Feelings that don’t correspond to the closeness, the ease, or the sense of relaxation pop up, ready to be released. Those feelings, held in storage for days or months or years, don’t match the present circumstances. It’s as if the limbic system says, “Hey, we have a wad of xyz upset in here that is old and taking up lots of space. The world isn’t xyz any longer. Let’s heave it on out!” and up comes the upset, right at the time when parents are trying to relax and enjoy their children 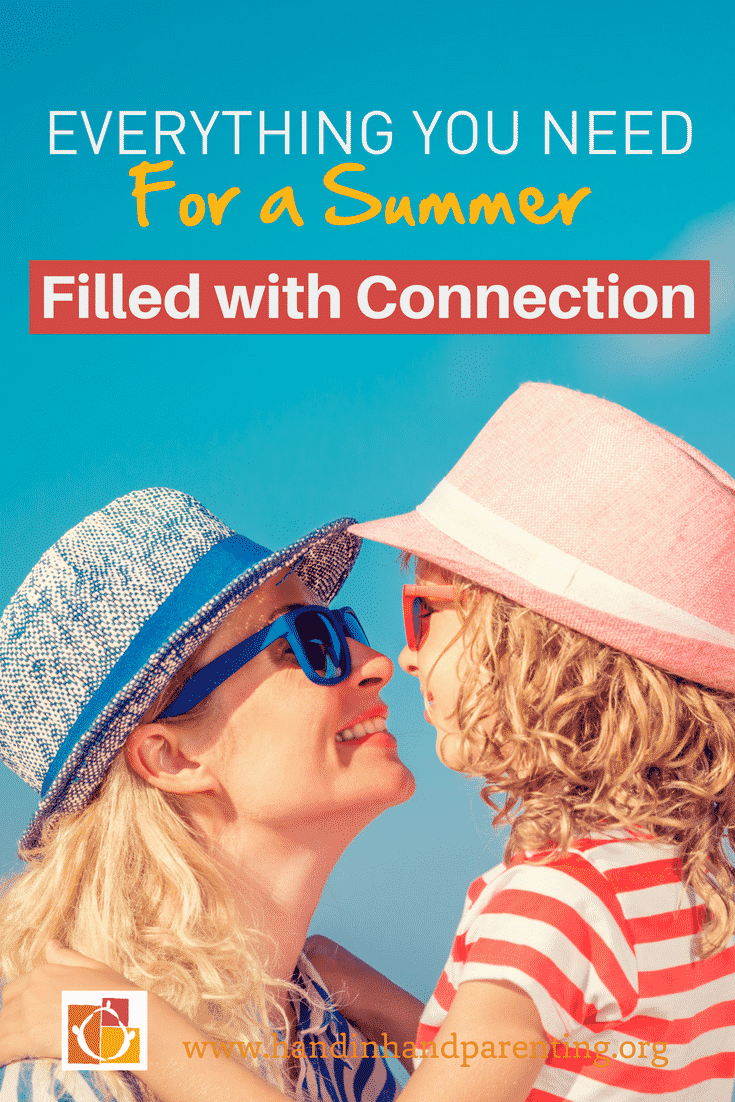 If you’re not ready for your children’s emotional cleansing sessions, you’ll be irritated for sure. You’ll think, “This ungrateful kid can’t tell that we’ve practically stood on our heads to get her to Jungle World. And now she’s crying because we won’t buy her a second stuffed animal! What have I done wrong to raise such a child!?”

Read about why children act up on vacations

If you can remember that when conditions are especially good, children can cry about times they weren’t wonderful, and that they do this so they can leave the emotional debris of that past incident behind, you’ll think, “Well, this is a hassle for sure. But here we are, we don’t have anywhere we have to be. We can sit here and listen to her cry about wanting a second stuffed animal. We can just keep saying ‘No,’ and loving her. That’s what she needs, and that’s what we’ve got. Time and love. The rest of the people here we’ll never see again. If they are bothered by us, they can find another gift shop.”

One of our Hand in Hand moms went with her husband and her two sons on vacation in Hawaii. It was a very special trip. The whole family went through a three-hour time change, and this upset sleep and family rhythms for the first day or two. They used Playlistening—wild wrestling and pillowfights in the morning—to help relax her children, who were tense with the changes and the early rising. They also took care to give their boys Special Time—each of them took one son, and did an hour of Special Time each day, trading boys back and forth from one day to the next for it. The boys were also getting unusual treats: special foods, lots of fun in the water, and even a video or two, usually forbidden at home.

By the third day, their older son, who has been an edgy, tightly wound child from the beginning, launched into a big cry. The pretext was small, but the theme was, “You never take me anywhere!” He went on for very long time. His next upset was, “You never buy me anything,” launched right after he’d been allowed to buy a new toy. He was clearing out old feelings that the new and relaxed situation had shoved up for healing.

The parents guessed that, over the next week, he cried a total of 4 or 5 hours, hard! They listened and didn’t hurry him. Yes, it was disappointing at times, but they decided to trust his sense of what he needed to do at any one time.

His little brother also had some really big cries, the most obvious of which was one sitting on the jetway on the way home, refusing to walk because the airline attendant had handed his brother a boarding pass after scanning it, but not him.

Not surprisingly, the parents were feeling a bit badly. They'd imagined an idyllic time, full of play and enjoyment, and then found themselves handling a least one big long cry each day. But, when they returned, they noticed a huge payoff in the behavior of their oldest. He was one who had always refused to touch a vegetable. He began showing off, eating every vegetable at dinner, and salad for breakfast! He would never clear his plate from the table. “It’s too heavy,” was his usual excuse.

After vacation, he started showing his parents how many plates he could carry at once—up to five at a time!

He usually never allowed his mom to help him with spelling or other homework. Any suggestion was rebuffed, or taken as a criticism. After vacation, presto! He was easy to work with, interested in suggestions, open to help.

The boys’ mom says that they have a neighbor who gives very few compliments, and who has known her son since infancy. A week after they came home, he said to her, “Your son has become so flexible, so easygoing! I’ve never seen him like this.”

She is sure that what allowed this progress to happen was the close family time, and the Special Time, Playlistening, and Staylistening they did.

They hadn’t planned to create an emotional “spa” for their children. But children know when an opportunity is at hand, and they’ll go for healing and a better connection any chance they have. May your vacation offer such chances.

May you remember that your children’s upsets are the beginning of a summer growth spurt, a healthy sign that they love you and trust you to care. 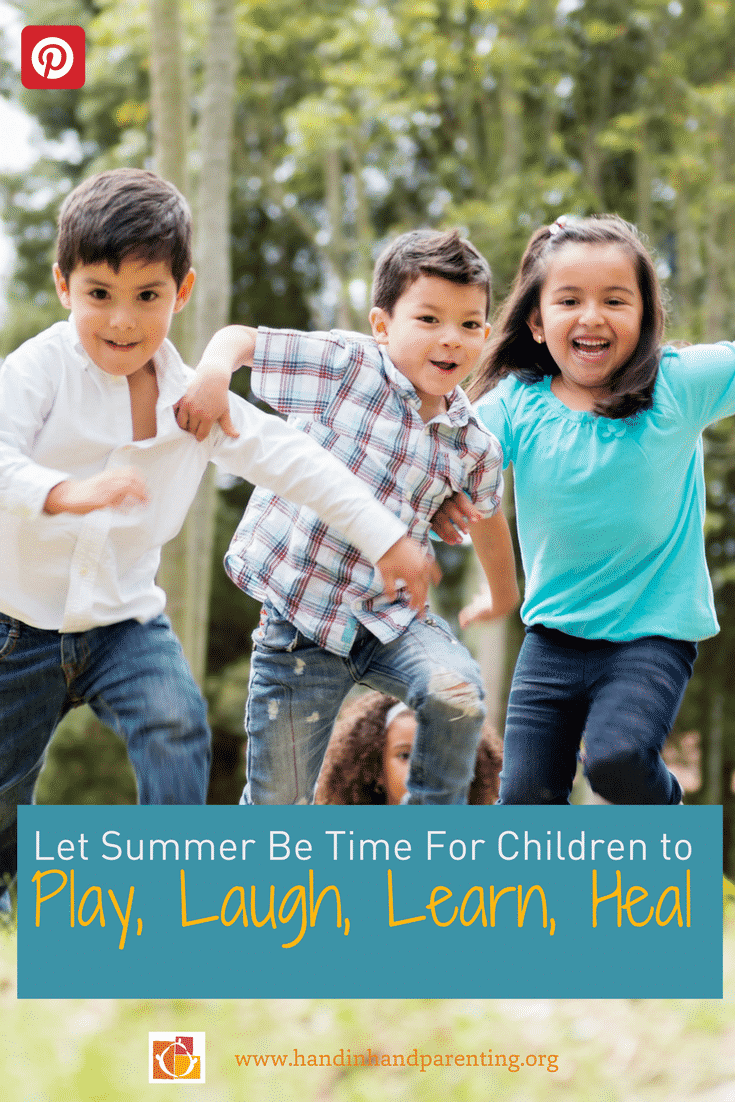