Every night after dinner, around 7:30 pm I play with my daughter, 4, and my son, 2. They decide where we will play and what they want to do. They have been choosing to play on my bed lately. Before we start, I let them know that I am setting the alarm for 15 minutes. This is enough for several kinds of play but we usually do some roughhousing. 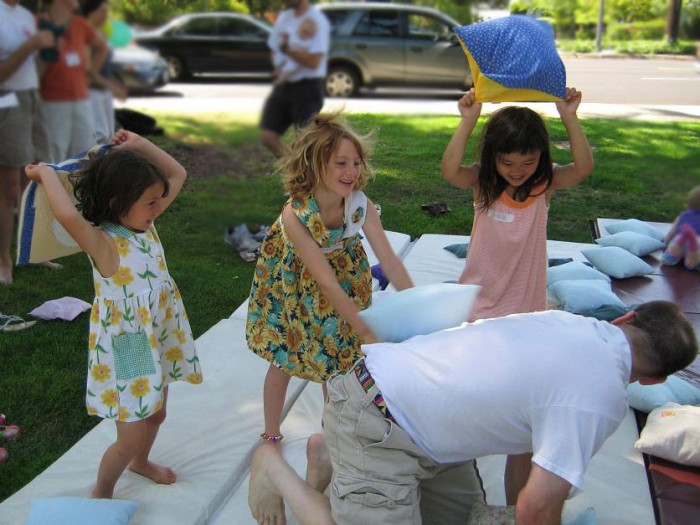 Last night, my daughter asked me to be a horse and started riding on my back. I walked on all fours and then I turned my body and she fell on the bed. It wasn’t a strong movement, but she said, “Dad, I didn’t like it.” I realized that I had taken the lead of the play from her and had introduced an element that was not aligned with her needs at that particular moment.

After that, I decided to pay more attention to their needs and started to ask what they wanted the horse to do. They invented this play where the horse would let them climb, give them a ride, eat and drink. At some point, the horse was even combed.

Later on, my daughter said that I was a child-eating lion. I asked my son if he wanted to be part of this play and he said, “No.” I am glad I was present and connected, otherwise, I would have included him in something that he didn’t ask. Even my daughter, who suggested the play, said that she didn’t want the lion to eat her. I think she wanted the lion to eat her brother, but I am not going to make interpretations about sibling rivalry here.

Patty Wipfler, founder of Hand in Hand Parenting, calls this kind of activity Playlistening. One of the basic rules is not to allow your own issues to intrude in the play.

“Sometimes, because of issues we never resolved
as children, we will tend to direct the play toward
issues the child did not raise…
It’s not easy to follow a child’s lead in play. We have our own preferences, and the issues our children choose to work on aren’t always ones we’re comfortable with.”

I think the best thing that happened was that my daughter told me what she didn’t want and what she did want. Also, I was glad I didn’t start getting down on myself for having made a mistake. I simply remembered to pay more attention and moved on.

Give Kids Their Power

I am not sure about what issues I had as a child that led me to make my daughter fall from the horse, but this surely changed the power structure of the play. All of a sudden I was the most powerful one, the strongest.

During Playlistening, this is not what children need.  “The idea is not to try to act childishly, but to lightheartedly adopt a less competent role. You’re not trying to fool anyone about your real capabilities. You’re not giving up your parental responsibilities. You’re offering your child a bit of relief from the rigors of childhood, which include being smaller, weaker, less respected, less skilled, and less free to determine how life goes.

The laughter that results when your child finds herself more powerful than you will release significant tensions. It will also bring you both closer…Embarrassment, light fears and timidities dissolve.”

It is not always possible to know for sure what kind of tensions the child is releasing during play. Sometimes I feel that trying to interpret what is happening during Playlistening makes me lose the connection. So I prefer to let go of the need to understand the content beneath the play as long as they are laughing and having fun.

Had enough tantrums and time-outs?

In this free class you'll learn what drives kids hard-to-handle behaviors, and you'll get practical, science-backed tools to use with defiance, tantrums, separation anxiety, crying and more, so you can calmly parent with confidence in a way that actually supports your child.

Watch now or later! Book a time to watch that's most convenient for you.

This post was written by Marcelo Michelsohn, a Parenting by Connection Instructor Candidate in training.