When Your Child Is Stuck in Repetitive Play 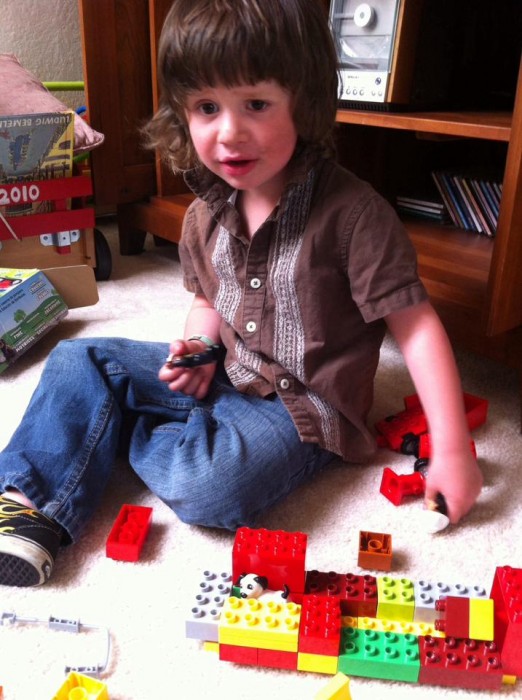 Q. For a while now my son has been stuck in a theme of building “cages” or “prisons” to put bad guys in. He’s focused on all the places in the house where he could potentially lock someone in or out…While I realize this could just be something he needs to play with and get out of his system, sometimes it scares me, and I especially don’t like that my sweet daughter is getting into this way of playing…I love the ideas espoused by Hand in Hand, so I’m all ears. What do you think?

A. When children do repetitive play for long stretches, it’s often because of an underlying fear. The fear drives the child into play that indicates something about the nature of his fear, but the play, by itself, doesn’t ease the fear. When there’s little or no laughter during the play, there’s no release of tension, and no shift in how the game is played. As an adult plays along, the play becomes increasingly rigid. I’m sure you’ve seen this!

A child’s demands for exact compliance with the picture in his head become stronger because your presence builds his unconscious sense of safety. The safer your son feels, the more fully he can feel the fear that is rumbling uncomfortably close to the surface. When you challenge your child’s sense of what “has” to happen, he’ll tip into an upset because you’re not “doing it right.” One step beyond that point is where your son will be able to actually explode, and offload the fear he’s been wrestling with. Here’s how to use the Parenting by Connection tools to help him release the feelings that lock him into fascination with cages and prisons.

The first step is to go along delightedly with your son’s fascination in Special Time, in order to build his sense that you are on his side. Since you’ve seen this kind of play over and over again, your ability to pay warm attention will be vastly enhanced by getting some Listening Partnership time where you can talk openly about your various feelings about him, about this kind of play, and about your worries and irritations. Have a tantrum about not wanting him to play this way! Cry about your worries. Talk about his infancy, and your experience with parenting him. There will be feelings to release, and thinking you can do, but don’t try too hard to figure things out. Focus on your feelings, and on expressing them. It will help you be more relaxed with prison play. It will help you look for precious instants when you can connect with him as he directs you. Connection is what he needs!

The little moments when laughter breaks through in play are constructive. They offer clues to promoting further laughter, which releases the lighter side of fear, and often opens the door to the deeper work on fear that your son will probably need to do.

Sometimes, when a child is intent on overpowering their parent, it can help for you, playing the overpowered parent, to fall on or roll on top of your jailer child. You’re still handcuffed or “jailed,” but you’re in direct, full contact with your child, sneaking in little bits of snuggling or nuzzling. You still beg for your child’s mercy, but you offer little servings of affection on the side. “Oh, I’m trapped again! But what is this nice, soft thing underneath my head! I like this! I didn’t know prison came with something so lovely, what could it be?” in the spirit of bridging the distance between you and your stern jailer child. See if laughter breaks through.

As you explore being a cuddly victim, or a victim mysteriously and magnetically drawn to her jailer, keep setting up time to explore your own feelings in your Listening Partnership. This kind of play demands creativity and good humor, and after a year of watching your child with concern, your warmth will be more apparent when you have the benefit of a regular emotional outlet.

Then, after you’ve done a hefty series of Special Times, in which you play prison victim the way he wants you to, and have found some ways to get laughter going, you change things up. The time for this change is after you’ve let him know that his fascination with prison games is OK with you.

Then, during a time which is NOT Special Time, when he asks you to play this game with him, get close to him, and gently and attentively say, “No, I’m not going to play the prison game today. We’re not going to do it for the next week.” Just that. Move in close, with a generous offer to connect. If enough trust has been built, his feelings will come up. His determined expectations are dashed, and the feelings that drive him to want only this kind of play will erupt in a good big cry about how mean you are, what a bad mommy you are, or some similar powerful expression of disappointment and, perhaps, rage.

It won’t be easy. Fear is an unruly emotion, and releasing it makes our children want to run far from us, or to fight us with all their might. You’ll need to keep yourself safe, while staying close enough to let him feel your caring. A child’s release of fear usually lasts a long time, the first time he really gets a chance to dig into it. For more on how to navigate this kind of productive but intense emotional episode, see our booklet, Healing Children’s Fears.

Continue to “starve” his fascination by not allowing prison games for the next few weeks, moving in supportively every time he wants to play one, and saying, “Honey, I’m not going to let you play the prison game right now. I love you. I know you want to,” and see if he can have a tantrum or a big cry.

Those underlying feelings are the ones driving his fascination with prisons and capture, even if it looks like he’s just mad at you. During those upsets, the issue underlying the prison game may come out. ”You like my sister better than me!” or “No one ever, ever helps me!” Sometimes, children crystallize a feeling from a trauma in the past into the phrases they say as they work through that leftover fear.

In any case, these cries will help. The things you want to tell him while he’s upset are that you love him, you want him to have a good life, that his feelings won’t last forever, and that you’re sure he’ll be able to think of other fun things to play. Reassure him that he will be able to play the prison game again some time, but don’t respond with a date or time. “Some time” is good enough—get too specific and the release of feelings will stop. Your thoughtful limit is what is allowing his fear to release. He needs your “No” to fight his way through these feelings.

And your final step will be to offer him lots of wrestling and physical play in which things move toward cuddles or kisses on elbows, knees, toes, and neck. Offer him lots of chasing around the house, lots of jumping into your arms. Offer the kind of play that lets him laugh and feel your affection. Perhaps letting him be the “baby” and being soft and tender and full of wonder at his beauty would be helpful, too. If you have a partner, you both can “fight” over getting to be with him, pulling him back and forth between you, both of you saying, “You can’t have him, I want him! I get to be with him!” These kinds of play help children with their fears, and can help them cry hard now and then about their intense feelings of need. Your son has been caught on hold for a while. He is just waiting for you to dive happily into his prison scenarios. Then, after you’ve shown him that you can join him there, he’ll benefit greatly when you say no. With your love and support, he’ll cry, storm, and offload the feelings that have caught him in his own sort of prison.

Let us know what you learn, and how it goes!