Every Child Has Feelings About Mummy Leaving

David and his mum came recently to a Parenting by Connection class series I taught, which included two Play Events. This is where families meet for a couple of hours, and the adults play with children just the way the children want to play. We do lots of Playlistening, where the children are in charge of the play, and we adults follow their lead and look for laughter and connection. This adult attention gives children great reassurance and encouragement, providing a marvelous insurance policy against the tough times they will inevitably encounter.

At the first Play Event, David played happily. He joined in a game with a mother who pretended to be a “monster,” sitting inside a little tent and trying to catch the children as they made daring forays into range.  As children approached, she would try to bundle them up and pull them into the tent. They would run away laughing, and then approach again, waiting to see what would happen.

When David’s mum left for a short Listening Partnership, she explained that she would leave the room, and that he would be able to get her if he needed, but he would be fine staying with me and the other children. Indeed, David played happily.

The next Play Event was a fortnight later, and, after some romping play, David’s mum let him know that she was going to go and have a Listening Partnership, giving the same explanation as the previous time. This time, David started to cry.

David’s mother stayed close by for a while to listen to him, gently telling him that she would always come back to him.  However, she did not have time for a “Long Goodbye.” This is where the adult proposes to child that she will leave, and often the proposal is enough to give the child the opportunity to begin to cry. When the tears back off, the adult might do some small thing to draw the child’s attention back to the feelings, like take another step away, or move the child gently toward someone else’s lap. This slow process gives the child the chance to fully feel the separation. A couple of opportunities like this can shift a child who is clingy to one who will cheerfully launch themselves off with a quick goodbye. David’s mum did not have time, however, because she really wanted a Listening Partnership, and she knew he would be safe with me.

David made the most of this opportunity to release his feelings! He sat quite relaxed on my knee looking towards the door saying, “Mummy, Mummy,” and pointing to where she was, sobbing. He did not try to get up and follow her. He cried quite heavily for a while, then slowed down. When his crying backed off, I said something like, “You really want your mummy,” or, “Your mummy will always come back to you.” He would cry hard again for a little while longer. His tears came in waves. 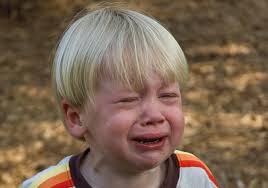 Why did I encourage him to continue? Why not just let him stop crying and help him move on to something else? Simply because he could still use the opportunity.

Though the crying was slowing, he was not readily moving on to something else. In my experience, unless mum’s return stops the crying, a child who has clearly finished a cry like this becomes really interested in other things going on around him and often starts a playful game. I’ve found that a child who has stopped crying hard but is not clearly ready to move on to something else can often benefit from being offered permission to keep going. Children have a natural inclination to heal from physical and emotional hurt, and they will take the additional time if they need it.

However, by the time a child is school aged, especially if he is a boy, he has been told that it is wrong to cry. He has learned to “pack it away,” to pretend that he is not upset. My daughter, who is 9, often tells stories of hardship at school where the main thing she is proud of is that she did not cry. Adults and children alike can find it a real challenge to keep crying about something non-urgent without some explicit reassurance that it is okay to keep going.

Was my encouragement forcing David to feel sad? No; he felt sad anyway. Stopping him from crying, or distracting him, or not offering the reassurance he needed to keep going, would not have stopped the hurting.  It would just have sent it underground, where it would have lurked until David found another opportunity – another “coat-hanger moment” – to try to offload it. Such lurking hurts can play havoc with children’s good judgement and confidence.

Would it have been easier for David to keep crying if he had just gone to his mother? Sometimes a child needs to be quite close to their parent to keep crying.  However, I’ve found some degree of physical separation is often necessary.  In his mother’s arms, David probably would not have been able to keep feeling the sadness he had accumulated about being away from her.

Adults often do not need to do anything to immediately “fix up” the thing a child is upset about. Though he felt her loss, David would not be damaged by not being with his mother for a few minutes. In cases when a “fix-up” is needed, it will go better once strong feelings have subsided, anyway. And every now and again, our child gets so upset about something so unlikely that we know for sure it could not be the source of the real upset and we can relax and confidently just listen.

It can sometimes feel very hard to Staylisten like this. I’ve found it helpful to know that it is not necessary to listen it out fully every time. Every little bit does something to drain the bucket of sadness. Over time, these cries will ease the difficulty of parting. When I can listen no more, I try moving the child on to something else. If the child has not quite finished, I trust that he or she will find another coat-hanger, another time.

What was very special about sitting with David while he cried about missing his mum was that he clearly was choosing to continue using my attention to offload his sadness. He could easily have got up and gone to his mother, but he did not.

After a while, he started to play a little game making a funny noise. I copied him, and he laughed a bit. Then he went to see what the other children were doing.

When his mother came back, she said, “I didn't know he had those feelings; he is always so easygoing.”  I think that all children, regardless of temperament, probably carry some sadness about times we have had to be away from them. I was so pleased to have been able to help David, and I appreciated the trust his mother put in me. She had been courageous in leaving him with me and in not trying to comfort him out of his feelings. 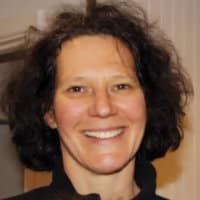 Learn more about why separation anxiety happens and how you can help. Madeleine is hosting a free parenting call on September 11th, 2016. Join her on the night and ask questions or listen in to the free replay. Read more about the call and sign up here.