Children with high anxiety spend much of their time “on guard,” on the lookout for potential dangers. You can use dramatic play to help loosen up this hypervigilance. Here's three games you can play to confront fear and anxiety.

When I first met Brook, she was a girl who was easily agitated, especially if her routine was disrupted. When that happened, she asked her mother the same questions over and over, and was never satisfied with the answer. Her mother, Brenda, frustrated with this pattern, was often impatient. When I asked Brenda what she had tried to help Brook, she rolled her eyes and said, “I’ve tried telling her to relax, that there’s nothing to worry about. I tried sticker charts. I guess if any of that worked I wouldn’t be here.” 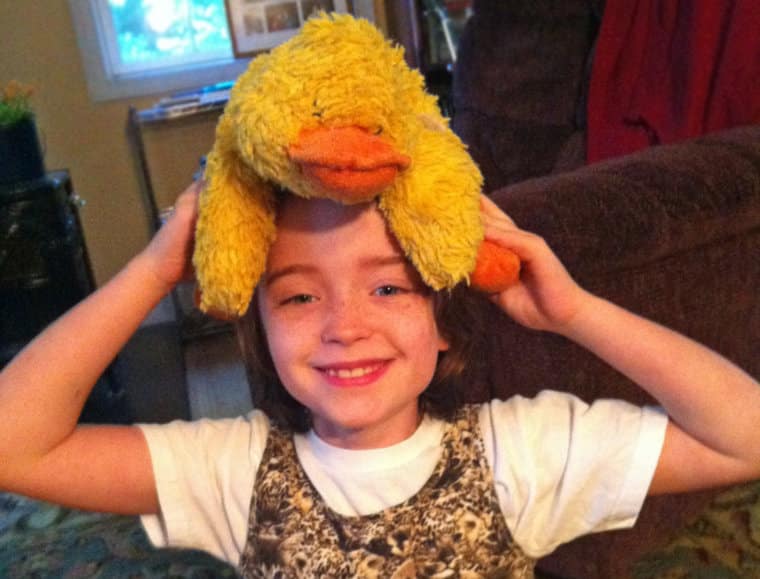 Brook loved make-believe play, so I encouraged Brenda to play Security Duck. I loaned them a silly-looking stuffed duck that Brook had enjoyed in my office, and suggested that Brenda make it into a security guard who was overenthusiastic about her job, but frightened by everything. Brenda asked me what she should do with the character of the security duck, but I told her that she and Brook would figure it out at home. They did!

Brenda pulled out the duck and made up a funny “guard” voice for it: “I’m going to guard the whole barnyard to make sure everything is safe. I’ve heard there are some dangerous puppies around here.” Brook giggled as her mother made the duck strut around the room, acting super-brave until she saw a tiny stuffed puppy. Brenda made the security guard duck run for cover from the “dangerous puppy,” screeching in pretend fear, which made Brook laugh more. Brook went to get all her stuffed puppies and delighted in frightening the duck with them. Over time, the game evolved as Brook found more and more ways to scare the duck, who alternated between outrageous bragging (“I’m not scared of anything!”) and silly cowering.

Brook added a new element of the game, in which the puppies bravely protected themselves and the security guard duck. Previously, she had been afraid to have anything “bad” or scary ever happen in her pretend play. Now she created wild make-believe dangers. The puppies always saved the day, while the duck hid in fright. After a few weeks of playing these games, Brook’s hyperalertness decreased and she was better able to handle changes in her routine.

Brenda was surprised that a silly game filled with giggles could make a difference when more serious approaches had failed. But it wasn’t just silliness. This game had all three key elements of a playful parenting approach: Mom playfully engaged with her daughter and with the problem that was troubling both of them; they shared lots of laughter; and the roles were reversed, so Brook could be strong and brave (or scary).

I Can’t Watch is another game I often play with children who are physically timid. I learned this game from Patty Wipfler, founder of Hand in Hand Parenting. At a family roughhousing event, I used this game with a six-year-old boy named Davy. He was hesitant to try any of the moves I demonstrated, though he watched the other children with interest. His father coaxed him to join in, with no success. I walked over before Dad could get too frustrated. “Wait a minute, Davy,” I said, “you’re not going to walk, are you?” He tentatively shook his head yes, unsure what I meant by this strange question. “Oh, no,” I said, “I can’t watch. Walking is so dangerous. People sometimes fall over.”

I whispered the last two words in fake horror.

Davy knew just what to do. He started to walk, making sure I was looking. “Oh, no, no, no,” I shrieked, “I can’t watch.” I covered my eyes with my hand. Davy said, “Look!” and did a somersault on the tumbling mat. I howled in more mock terror. “Not a somersault! Dad, did you see that?” Davy’s father also knew just what to do. He said proudly, “Davy can do somersaults, flips, anything he wants! Just watch him!”

I shouted, “No, please, I’m shaking all over just watching him walk, what if he falls over?” Davy proceeded to “scare me” with one physically adventurous move after another, including ones he had been reluctant to try before this silly game. As always with this type of play, I was very careful that Davy didn’t feel teased, because the goal was for him to feel powerful, not humiliated.

Once I realized the importance of the all-clear signal, I made up a game called The Coast Is Clear—Or Is It? I start the game by hiding dramatically behind a piece of furniture or underneath a blanket. Then I whisper to the child, “Is the coast clear?” I make up something outrageous that frightens me—something absurdly non-scary, like tiny puppies, or something extremely unlikely to appear, like pirates. Don’t use something your child really fears, otherwise the game can become really scary instead of pretend-scary.

In this game I embody an overactive alarm system, while children get to play the part of a confident all-clear signal. (They don’t think about it this way, of course.)

Once they promise me that the coast is clear, I come out of hiding, only to discover something new that scares me. It might be a pencil: “Oh no! The pirates must have been here making a treasure map with this pencil!” I race back under the blanket. The children eventually convince me that all is well, that I am safe. Their repetition of the all-clear signal in a playful setting has the magical effect of increasing the power of their own internal all-clear signals. Of course, some children don’t want to reassure me, they want to point out more and more things that will scare me. The results are the same. Play brings laughter, and laughter loosens fear.

An excerpt from The Opposite of Worry, by Lawrence Cohen, PhD

Interested in learning about using Hand in Hand's listening tools in your work with parents or families? Listen in as Patty Wipfler interviews professionals about the many Hand in Hand successes in their practices.

You can read more on the Clinical and Therapeutic Benefits of the Hand in Hand Parenting approach here.

If you know you’re ready to enroll in our next Professionals Intensive, you can reserve your spot here. Please register early as small-group mentoring sections fill quickly.