We were at an impasse for at least 10 minutes. We tried to wait patiently for her to be ready to leave, but she refused to buckle her car seat and physically prevented us from helping her. Finally, after at least 10 minutes, she allowed me to help her. She was tired and angry and the look in her eyes said, "Help me. I'm in here somewhere and I can't find myself."

Our family was together at a friends house for a BBQ.  My husband and I had been away at a business conference for the previous 4 days. It was the end of the first day we had all been together in a while and we had had a relaxing day at home that included special time!    When we arrived and during the BBQ, everyone was relaxed and having a good time.  After a few hours, it was time to leave and our three-year old was tired and getting irritable.  She is typically quite agreeable and flexible and this was a sure sign that it was time to go. 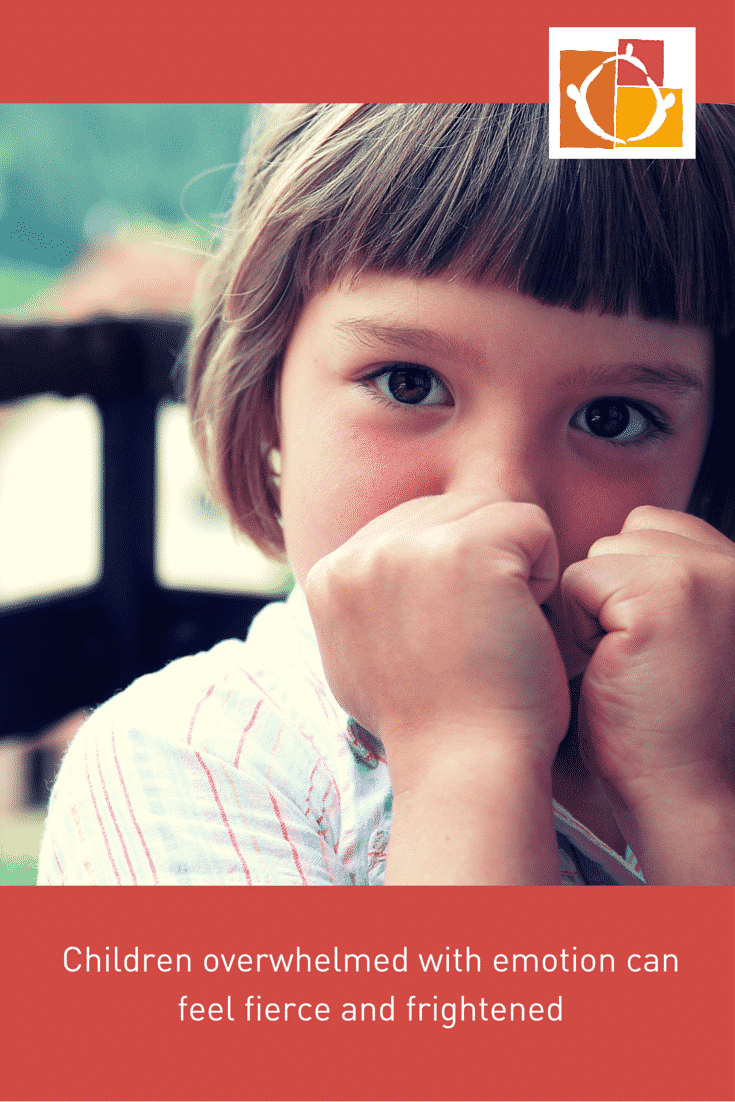 By the time we had said our goodbyes and gotten in the car, K was overwhelmed with feelings and exhaustion.  She had just eaten a cookie and knew we had taken extra cookies home with us. I had told both the kids they could have another cookie tomorrow.  K insisted that she wanted another cookie, right now.  She folded her arms as she sat in her car seat and refused to buckle herself in.  My husband and I held two limits: 1) no more cookies tonight and 2) she must be buckled in her car seat for us to go home.   She repeated her request for another cookie while we told her she could have her cookie tomorrow but no more for tonight.

We were at an impasse for at least 10 minutes.  We tried to wait patiently for her to be ready to leave, but she refused to buckle her car seat and physically prevented us from helping her.  Finally, after at least 10 minutes, she allowed me to help her.  She was tired and angry and the look in her eyes said, “Help me. I'm in here somewhere and I can't find myself.”

After the short drive home, K refused to get out of the car. She continued to insist on wanting a cookie and I knew this was not about the cookie or the car seat.  She thrashed and kicked and tried to hit and scratch me.  She did not cry.  She was mad and wanted to lash out.  I helped her out of her seat.  She was feeling fierce.

Rather than being reactive, I thought about things from her perspective.  She's the little sister and does not like feeling incompetent or left out.  This can happen to her a lot in her situation. I also thought about how she might feel about leaving a fun party, being tired, and having missed her mom and dad for the past 4 days.

I was able to tune in to her feelings and her human-ness and let her lash out.  We spent at least 20 minutes with her punching sofa pillows, pushing against me and her wanting to scratch my eyes out.  I redirected her to the pillows over and over. Finally she melted into her feelings and was able to cry. She cried and punched and kicked away.  I knew she was letting go of lots of fear and sadness.  She was mad at us for leaving and, in some ways, mad at us for coming back because she also loved the time she spent with her Grandma.  Setting the limit gave her something to push against with her feelings.  Holding the limit let her physically express the fear and big feelings.  This is especially important for K, because letting go of feelings doesn’t come as easily for her as it does for her older sister.  K needs a little more gentle encouragement to have her voice heard.

After 30 minutes of Staylistening, K was able to let go of wanting the cookie and move into getting ready for bed.  She went from refusing to move from the car, to going along with my suggestions of putting on pajamas and getting in bed.  We had to keep the bedtime routine simple that night.  Her big sister had also been patient and I was thankful that her dad was there to focus on her while I could focus on listening with K.   K went to sleep relatively easily after that and woke up in the morning asking to have a cookie.  🙂

That next day she was her usual flexible self until the late afternoon, when again she needed my attention for feelings that built up while I was gone.  She and her sister both recognize and honor the need to cry and we support each other in the process.  Her sister brought her stuffed animals and a blanket and made her a pillow nest until she felt better.  After that we were able to get through dinner with only a few complaints and a little whining and then off to bed with no struggle.