Social exclusion can be painful for the whole family. Here's how you can help.

In second grade, my friend’s daughter entered a new school. She enjoyed her first year there, but in third grade, she came home crying many afternoons, saying that her friends were excluding her, and that none of the boys wanted to play with a girl any more.

My friend Staylistened to her daughter for several afternoons, but became worried when her daughter moved into big cries almost every day.

She would recount the slights of the day, and feel heartbroken.

My friend became worried, discouraged and disappointed. She was a single mom, and had worked so hard to find just the right school for her daughter, who she knew carried some insecure feelings. She thought she’d found just the right place. Now, look what was happening!

“You’re not my friend today. Alissa is my friend!” action, with changing alliances almost every day. And why wouldn’t the boys play with the girls?

My friend took her worries to her Listening Partnership. It was hard to keep up with the feelings her daughter triggered in her, but she worked at it. Every day, there were painful interactions to be told and cried about. Finally, after about a month, my friend, exasperated, checked in with her daughter, at a time when feelings weren’t high. “Do you want to change schools?”

There was something to hang on to.

The months went on, and her daughter’s hurt feelings didn’t lessen. About once a month, my friend checked in with her, asking if she wanted to change schools. She didn’t. The unspoken message my friend took away, month after month, was that her daughter was choosing to cry, with her support.

She didn’t want out. She wanted through this.

In addition to the listening my friend did daily, she and her daughter began to come up with a few initiatives to try to freshen up the interactions at school. They invited each one of the girls who were pulling the exclusion card to their house for play dates. They planned fun things to do. It helped somewhat, but there were still many tears. Daily tears.

Toward spring of that year, this mom decided to go to the teacher, and see if she could get permission to come in and present a play activity for her daughter’s class of 20 children. She proposed physical play, play that put her in the less powerful role, so the children could laugh. There would be a “target” that wasn’t another child. She decided to bring a few wrestling mats, and to be a bucking bronco for each of the children in turn. (She’s quite the adventurous mom!)

The teacher agreed. The children loved it!

They laughed and cheered for each other, and my friend “couldn’t buck them off,” they were so strong and clingy. Or when s 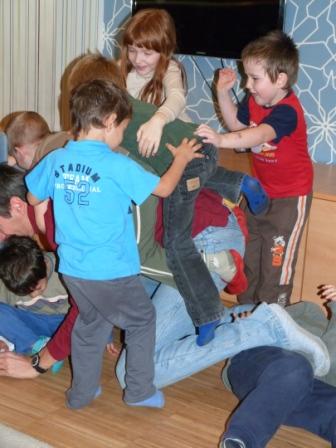 he did, they climbed right back on.

She marveled in 20 different ways about how strong these children were, and wondered why, oh why, she couldn’t buck them off. They timed the turns, and she managed to get through all twenty!

This brought a strong sense of fun and solidarity to the class—it was an extraordinary event, and it worked just the way my friend and her daughter had hoped.

After that play session, interactions opened up between the boys and the girls. My friend’s daughter was finally able to play hard with the boys, and so were several other girls.

The girls stopped targeting each other so often. And my friend’s daughter began to feel happy and at home and at school.

By the end of the school year, the fairly constant expression of fear had left my friend’s child’s face.

She felt more powerful. She was a happier person. She had dissolved enough feelings of victimization that she carried herself more confidently. She had experienced her mom’s support.

Together, they had turned the social interactions in her class from segregated and exclusionary to cooperative and, for the most part, positive. All with a long, hard, bitter cry every afternoon for months, and with Listening Partnerships to melt away the mom’s discouragement and heartbreak. It was a big accomplishment, done step-by-step.

Each of them had made a permanent gain in confidence.

Long-term crying or off-track behavior can signal your child is experiencing an Emotional Project. Read about why they happen and what you can do in this Step-by-Step guide.

Discover how play brings you closer to your kids.

Here's how you can help your child's aggression through play.

Elle is the Content Editor on staff with Hand in Hand. Her background is in content creation for high-end brands and travel. Elle is a HiH Certified Instructor, host of the 100-episode Hand in Hand Parenting Podcast, and editor of the HiH weekly parents newsletter. Elle resides in Hong Kong with her husband Rick and their two kids.