Spitting to Kissing: Responding Playfully to My Aggressive Child

And even though he felt better, I ended up emotionally spent before my day even started! I was desperate for something different and decided to try playlistening.

My son and I had been having hard mornings.  He would wake up, no doubt feeling disconnected, and just ask to watch a show.  He wouldn't want me to talk, touch or look at him.

I would see a need for connection and get close to him. This turned into a long session of him kicking, hitting, biting, scratching and screaming that he hated me. Sometimes he would cry, but usually it was physical.

Often, I would be triggered because I'd gotten hurt. And even though he felt better, I ended up emotionally spent before my day even started!  I was desperate for something different and decided to try playlistening.

The next morning we woke up in my bed together (he often makes his way to my bed early in the am).  Immediately, he started doing things that annoy me, like, squeezing my nose and kicking me. However, instead of setting a limit, I played along.

It escalated quickly and we were wrestling and pillow fighting when he playfully spit at me.  Normally spitting really triggers me, but this time I just kissed his lips while he was spitting.  He laughed then went to spit again and I kissed him again, then he really laughed.  He would barely put his lips together and I would kiss him.

We played this over and over until we were both laughing hysterically.  It was so fun and we were so connected I barely noticed that a few minutes later we were having breakfast together and he didn't mention watching a show until the late afternoon.  This broke the pattern we had been in and our mornings are, for the most part, much more pleasant.

Do you work with kids? Would you like to add trauma-informed, resilience-building tools to your skills? Use these two tools to help parents overcome behavior battles, attune to their child's individual needs and react warmly.

Click here to find out more about Hand in Hand's attachment-based, emotion focus, and save your seat for this training. 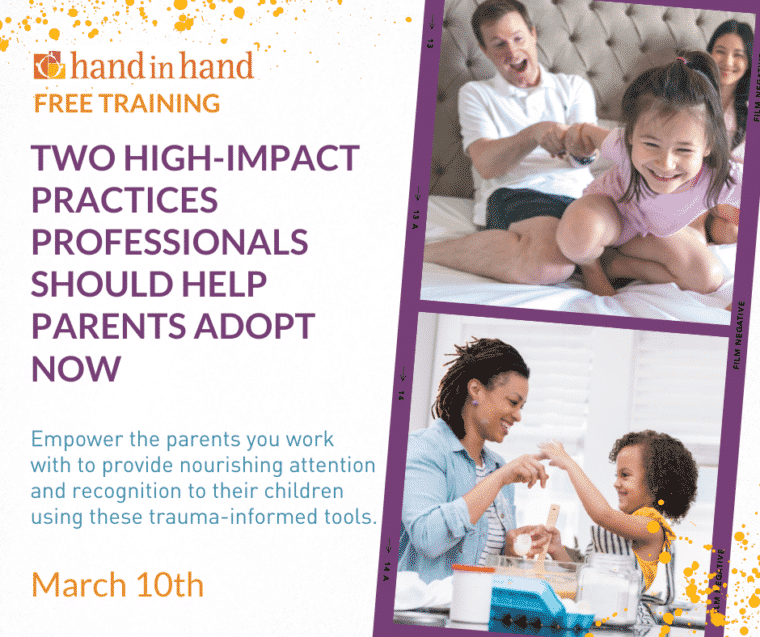