Dad Helps with a Dinnertime Fight Between Brother and Sister

I didn’t make him do it, but I didn’t give up on the idea that he COULD do it. 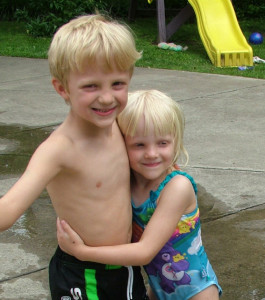 My older son and younger daughter were sitting at the table. It was dinnertime, and my son almost always finds a way to get upset with his sister at dinner!

I prepared myself mentally beforehand, telling myself that their fight was going to happen, and that I could intervene without getting angry.

I sat my son right next to my daughter, instead of sitting between them (which I often do to try to keep a fight from happening.) We hold hands before a meal, and take a moment to give thanks. So I said, “OK, let’s hold hands.” My son immediately protested as I knew he would. I said, as gently as I could, “Come on, hold her hand now.” That’s all it took to get them going.

My daughter got upset, but I concentrated on my son. He said, “Don’t force me!” And I said, “I’m not forcing you, but it would be good to hold your sister’s hand.”

I didn’t make him do it, but I didn’t give up on the idea that he COULD do it. He began to cry, and ran from the table. I followed after him into the next room, and he cried hard about how his sister always hurts him and teases him and kicks him.

I kept quiet about the things I know he does to her, and didn’t argue at all, just listened with all my belief to the wrongs he felt.

He cried for a long time.

He didn’t come back to the table a completely loving brother, and I didn’t mention the holding hands thing again. He still wasn’t feeling great. But later that night, I heard him saying very sweetly, “Do you want me to pick you up? Want me to carry you?” Normally he doesn't want to get physically close to her at all.

And as I do more of this listening to children, I see that they’re starting to play together more, and he’s hugging her sometimes. It’s unbelievable, actually! I’m really excited that things are loosening up between them.

It’s a real challenge for us, because we are so tired of their fights and their attitudes toward each other. It’s hard to be kind and gentle when the fights begin, but we’re seeing the payoff, bit by bit.

— A dad in Oakland, California

Listening to your children cry has amazing benefits for them. Find out why in this post How Does Crying Help You and Your Child?