How I Cooled My Son’s “Hot Button” Issues

I normally listen to his big feelings when he brings an upset to me, using Staylistening in response to his cues. This time, I decided that I wanted to help him with both these issues because they affected our daily life, and because they weren’t getting better on their own. 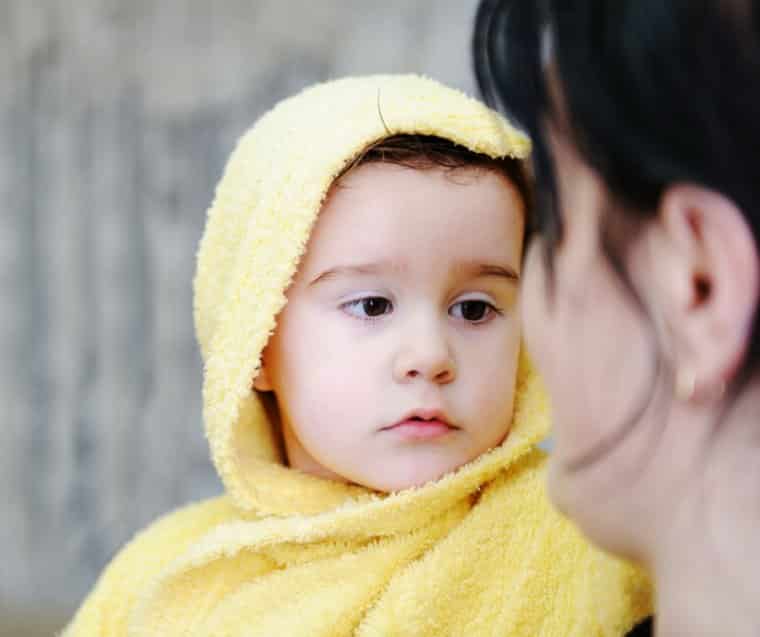 I have a son, Seth, who is 3. Recently I decided to help him with his feelings on two hot-button issues–falling asleep by himself and having his hair washed. I normally listen to his big feelings when he brings an upset to me, using Staylistening in response to his cues. This time, I decided that I wanted to help him with both these issues because they affected our daily life, and because they weren’t getting better on their own. I approached both issues in the same way, and here’s how it went:

Falling Asleep – My husband and I have always snuggled with Seth until he falls asleep, but we had to read him two stories and rub his back for about 15 minutes every night before he could sleep. We were ready for him to learn to fall asleep by himself.

First, at bedtime, I explained that I wanted to talk to him about falling asleep by himself at night. I told him I wanted him to be able to do this, and why. He was very unhappy about it. I lay down on the bed with him and told him that it was time for him to fall asleep by himself and he started crying. I didn’t continue very long because he sounded scared and something didn’t seem right. I stayed with him until he fell asleep, but he didn’t sleep well and woke up in a bad mood, so I decided to reevaluate my plan.

I decided that I had moved too fast, and really, we weren’t in a hurry. I decided that I wanted to make sure that he was in charge even though I was key in bringing up his feelings. I remembered that when we toilet trained him last summer he was excited about it and proud of himself even though we had initiated it. I wanted him to feel proud of himself for falling asleep by himself. I also remembered Patty Wipfler’s advice about using the lightest push possible to help a child face a difficulty. I decided that telling him it was time to go to sleep was too strong, and that I could just ask him if he was ready to go to sleep by himself.

The next time I brought up the subject of going to sleep on his own, I asked him if we could get in bed and just talk about him falling asleep by himself. I told him that at the end of it he would get to decide if he wanted me to stay with him or not. He agreed. I also suggested that we could do it in little steps—I could sit outside his door, or in the next room. We got in bed and read a story, and then I asked him if he could go to sleep by himself now. He was a little bit upset, but didn’t really cry a lot. Then he said that he wanted the light on and shining into his face and that I could sit next to the bed. I did and he fell asleep quickly. Since then I’ve asked him to meet the same challenge by getting his permission first and then asking him if he was ready to go to sleep by himself. Twice more, he said no and cried hard and got angry for a good long time.

Then we all got sick, and life became hectic, so I haven’t pursued this recently. But these few Staylistening times have made a huge difference. I still lie down with him, but now we just talk for a few minutes and then he falls asleep!  Also, he used to occasionally wake up in the middle of night, but since his last cry about sleeping, he hasn't awakened once.

Hair Washing – I worked things similarly with hair washing, something he hates. His preference was to never wash his hair, and it was a huge battle to accomplish that bit of hygiene with him.

I picked a day when his hair wasn’t actually dirty, so I didn’t care if we washed his hair or not. I asked Seth if we could get in the bathtub and just talk about washing his hair, but that at the end of the conversation, he would get to decide if we actually washed his hair. He said yes. We got in the bathtub and played for a little while, and then I said, “OK Seth, now can I wash your hair?” He said no, and started crying. I kept asking over and over, and he cried really hard and also got mad and had a temper tantrum. (That was challenging in the bathtub!)

Every few minutes he would stop and ask if he still got to decide if we were really going to wash his hair at the end and I assured him that he did. Then he would go back to crying. After about 15 minutes he said he was ready to get out of the tub and didn’t want to have his hair washed. We got out and he was extremely bright and happy the rest of the day.

I was very excited about these projects because I was able to initiate the work that needed to be done, and yet he was in charge of how it went. I felt really good about having found a way for my son to be in charge, although I was choosing to push an issue with him.

Also it was clear to me that he knew that he was agreeing to work through his feelings. Because I wasn’t overpowering him, or insisting that the interaction turn out a particular way, I felt that I could push pretty hard in bringing up the idea of challenging his bedtime routine, and his bath time fears.

—a mother in Seattle, WA

Get our free Secret Guide to Transforming Tantrums here