A few months ago I became a nanny for a 2 1/2 year old adopted Korean boy.  I believe the parents adopted him when he was 17 months old.  Prior to this time, he was in a foster home.

I watched him about 4 or 5 times before becoming his nanny.  From the very beginning, I felt a wonderful connection with him.  Our very first time together we connected through play. I played the “silly” role and he  belly-laughed to my antics.  Then, he would mimic what I was doing to more peels of laughter from both of us. 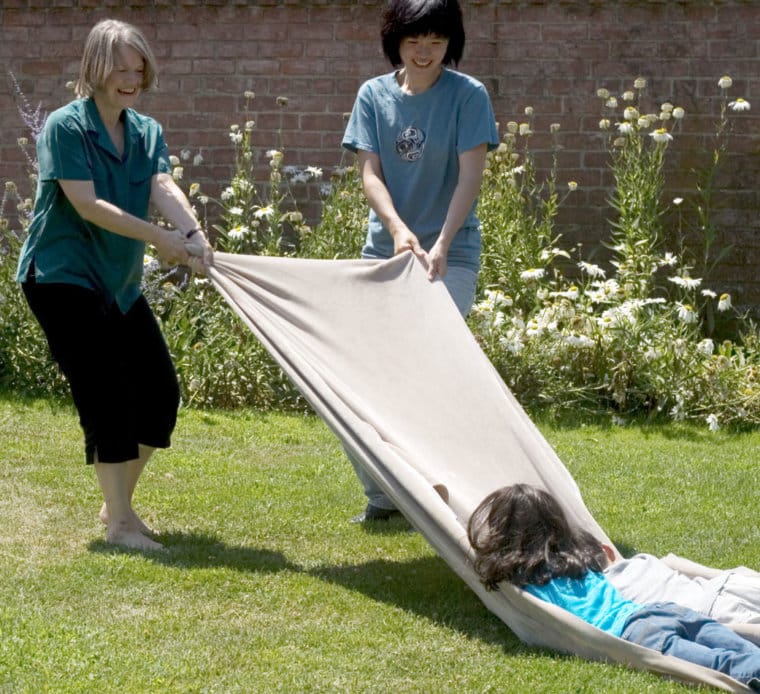 When I accepted the position of his steady nanny, I was very aware of his past, full of many separations and changes.  He continued to appear happy, very bright and it was evident that we really liked one another.  We had many more silly encounters including Playlistening where he was in charge of opening the cabinet and then he would quickly shut it so that I could not get in.  This was repeated many times in succession.  He was delighted with all this power he had as we played.

Our times together have continued in this way, with one added dimension.  I was aware of him becoming a bit more whiny about helping put his toys away and coming downstairs to get ready for bed.  One evening, when it was time for his bath, he pulled his blankey out of his crib and hugged it while lying on the couch. I told him he could hold it until the bath was ready for him.  When I told him the bath was ready, he refused to get up and clutched his blankey.

I gently took his blankey and put it in his crib and told him right after the bath he could have his blankey again, because it would get wet in the bath.  The following hour consisted of him screaming, crying (with little tears), and kicking his legs with an extended arm toward his crib, repeating over and over again how he wanted his blankey NOW!

I remained calm and gently said after the bath he could have his blankey.  This erupted into more screaming.  Without doing much talking, I occasionally mentioned how hard it was to wait, that he could have it after the bath, and that I would stay right there with him while he was feeling so bad.

In the middle of the tantrum he stopped and noticed a coin on the couch.  He picked it up, we had a bit of conversation about it, shared a smile or two; and then, alas,  back to screaming how he had to have his blankey NOW!  After about 45 minutes, he allowed me to carry him into the bathroom.  He started calming a bit and we discussed the toys on the bathroom sink.  Eventually, I asked if he was now ready to get into his bath (cold water at this point).  He said he was ready so I added some warm water, and even though he was not quite the happiest camper, he was ready to move on.  When he got out of the bath, I immediately gave him his blankey as I dried and dressed him.  All was well after that.

Fast forward to the NEXT time I was with him.  Same routine: me getting bath ready, him on the couch with blankey waiting for me.  When I gently told him it was now time for his bath, he looked for a moment as though he was going to protest, then he carefully laid the blankey on the couch and cheerfully got up for his bath!  AND, then the next time I was with him, same routine,  EXCEPT when  I was preparing his bath,  I looked up and there he was waiting with a slight smile on his face to come into the bath.  He had parted from his blanket on his OWN and was coming in to get into the bath.  This same thing happened the next time as well!

Even though it was great to see him work through some deep feelings with the ‘blankey' as the catalyst, the real reasons for his tantrum aren't as important as the fact that he was comfortable enough with me to have a tantrum.  I am sure all the laughing and Playlistening  that we shared is very important groundwork for building trust between us.  My guess is that there will be more opportunities for him to express what he needs to express.  I feel very lucky to have this opportunity to be with him in all these manifestations!   I do find myself feeling amazed by his predominately cheerful, happy-go-lucky self in light of all the separations he has experienced in his young little years.   As I enjoy all this, I am also ready at any time to be there when he  needs a soft touch, a caring voice, and a warm presence so that he can once again feel safe to get all the fears and hurts out!

– Sushila Hart, a Parenting by Connection Instructor in California