My husband was making a pot of oatmeal for breakfast last weekend, and it was time for the family to come to the table.  But our 8- year-old son saw that the oatmeal wasn’t the kind he usually has, and he started saying, “I hate that oatmeal!” My husband responded, “Well, that’s what there is for breakfast.  It is either that or nothing!”And our son said, “I want the oatmeal I always have! I hate that kind!”

I was quietly listening to the conflict. Our son left the table screaming and yelling and very upset.  He kept saying, “I hate this oatmeal!”My husband was getting a little upset too, and suggested, “If you don't want to eat this oatmeal and you want to act like this, then you can go to your room, please!” At this point I saw our son going to his room alone, and I told my husband I could take it from there. I followed him into his room, and said, “Hey, you really hate this oatmeal, don’t you?” Our son said, “Yeah!” and started yelling and screaming even more.  “I hate always doing what you want me to do!”

Soon he became physical and I needed to hold his arm and to keep a safe distance so that his hitting and kicking would not land on me.

I kept blocking the hitting, and his kicking and hitting continued while he kept hating the oatmeal. Then, all of a sudden, he started laughing while still kicking. When I heard his laughter, I felt assured that I was doing the right thing by allowing him to let off steam and to be understood.  His little brother was relieved at seeing this too.

Then, together, my son and I alternated between stomping our feet around the room, chanting, “I hate this oatmeal!” and him doing protected kicking and hitting. We wound up laughing until we both fell on the floor. Finally, our son stopped and said, “I am ready to eat my oatmeal now!”

And he ate the whole bowl of oatmeal and even had a second!  He was cheerful all morning after that. Today, a week later, we asked him if he would like to have some oatmeal. He saw that it was the kind he had hated so much a week ago. He answered, “Oh, I like this kind of oatmeal!”

–A Parent in a Parenting by Connection Starter Class 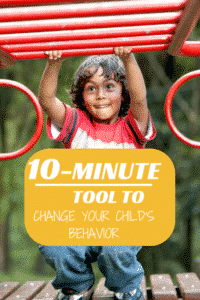 Do you want some more playful parenting ideas? Check out the 10-minute tool you can use to dramatically change your child's behavior.