My 13-year-old son was off track in a way that doesn’t happen often. I asked him to turn off the TV in order to shift to bedtime mode at 9pm on a Sunday, and he resisted. It led us to a talk about screen time and balance. 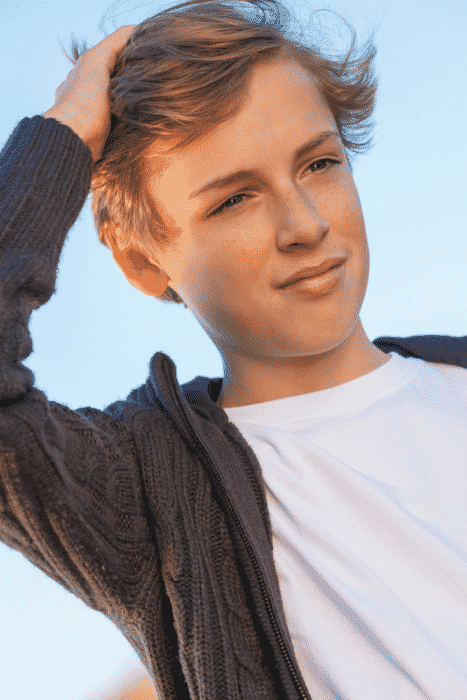 This weekend had been both very busy for me, and full of screen time for the boys, my older son especially. I was occupied with pulling together the last details on our beehive in preparation for picking up our first package of bees the next day. I actually was quite preoccupied and even overwhelmed by what needed to get done for that project before Monday.

Understandably, we were not connected by the end of the day.

My son and I had a good dialogue about the screen time, but something must have struck a nerve because soon afterward, emotion came up for him. I realized he was in the bathroom, crying.

I tried to go in to be with him but he held the door shut. I told him I’d be close outside ready to listen. He eventually came out and lay down on the couch with a blanket over his head. I sat on the edge and put my hand on his back, but he shrugged it off and pushed me away with his body.

I let him be for a time to give some bedtime attention to my younger son. Just as things were quieting down and I thought he was falling asleep he got up and came to me saying, “Mom, I want to rearrange the room.” He let me hug him a moment and then veered off to push furniture around. I watched him for a bit and helped move things out of his way. Then I started to feel exhausted by the amount of disorder that was being created. I noticed that feelings were being stirred up for me, and retreated to my bed.

When he started moving things in front of my bedroom door, I understood that the moving of furniture was another sign of disconnect. I went in the bathroom and saw how he had moved things from the counter into the sink and squeezed out toothpaste. He was off track again.

I went to him and put my arms around him to pause his moving of things. He immediately pushed back. I stood strong and held the force of his pushing body with mine, meeting his push. We did this back and forth for a while. He went to my bed and we wrestled there. He went to the couch and we wrestled there. He tried to go into the bathroom and shut the door but I followed close behind and kept the door open.

My goal was to be close to him and limit his ability to channel his emotion into off-track behavior.

I could see clearly that the disorder he was creating by moving furniture was an attempt to move the internal chaos he was feeling up and out of his body, and I wanted to offer a more constructive way out. I wanted to give him a safe container to feel it fully and release.

For a long time we went back and forth, wrestling, or me being close by while he lay on the bed or couch. Each time he was alone on the couch or bed he reached out with a leg or an arm to swipe at me or throw blankets and pillows at me, sure signs of disconnect. I was tired and not sure about this territory. My
13-year-old has rarely released feelings in this very physical way.

As we wrestled, I sometimes got my arms around him from behind and was able to hold him in a way that kept us both safe from his hitting and kicking. He tried to bite and scratch me. A couple of times he pulled my hair. If I felt hurt or that I was vulnerable to getting hurt, and I pulled back and got out of his way. I knew it was my job to keep myself safe; that he was not functioning from a clear thinking place in his brain; that he was working on releasing something deep. There is more on dealing with aggression in this post.

I tried to keep my own thinking to a minimum. I focused on my breathing, and being fully present, I imagined waves of calm flowing from me to him. My younger son was up and about playing with the kittens and a bouncy ball the whole time. After about an hour of this back and forth, holding and letting go and holding again he broke into tears and sobs and cried in my arms.

It was after midnight.

When he was finished crying, he crawled to his bed and lay down. I wasn’t sure he was completely done, so I stayed close to him, sitting in the chair by the bed until both boys fell asleep.

The next morning, my older son came to me first thing and gave me a big hug. I felt relief that he had obviously released enough the night before to be back to himself.

However not only was he back to himself, he was back, bigger and brighter than ever. He launched into a story about a game and interactions with friends from the day before. He was reflective, expressing curiosity, amusement, cleverness. The rest of the day was fabulous. He was so connected to himself, to me, and to his brother. He was playful, helpful, engaged the entire day.

We had a great time in the city picking up our bees. Getting the bees in the hive was an adventure both boys helped out with. He played computer games with his friends for a couple hours and then he came back home and engaged in Star Wars origami and “Jedi training” with his younger brother for the rest of the night. At one point, he made reference to our conversation about balance the day before and he said, “Hey, Mom, this is something I can do to be balanced–origami! It’s hard and frustrating, but I like it and want to do it.”

I’m grateful I was able to offer listening power for as long as it took. Seeing the good results of my son’s clearing work made the lack of sleep and energetic mustering so incredibly worth it. I’m also grateful that I had had listening partnership time that morning over the phone. I’m sure that helped me listen
from a place of emotional stability.

Read about an amazing 10-minute a day tool that will keep you in tune with your teen: How Special Time Can Work with Pre-Teens and Older Children

Karen Murphy is the mother of two sons. She started using Hand in Hand listening tools with her children 8 years ago and it changed her world. Using the tools revolutionized Karen's parenting in such inspiring ways that she studied to became a Hand in Hand Instructor in 2010. She is excited to share knowledge, tools, experience and support to anyone seeking to increase connection with children. Karen offers classes, listening partnerships and consultations in the Columbia River Gorge of Oregon & Washington. Connect with Karen at www.mindfulparentingtools.com