Q. I’m afraid my middle-school-aged daughter is going to turn into an “angry teenager.”  Things seem to be going well for her right now but she can be unhappy, aggressive and moody, and she sometimes gets physical.   She had a very hard time in elementary school.  Is it possible that she could be working out feelings from years ago from things that upset her that she might not even be conscious of now? If so, how do I help her deal with them? Does a teenager end up crying to help heal the hurts or do they deal with things in a different way? 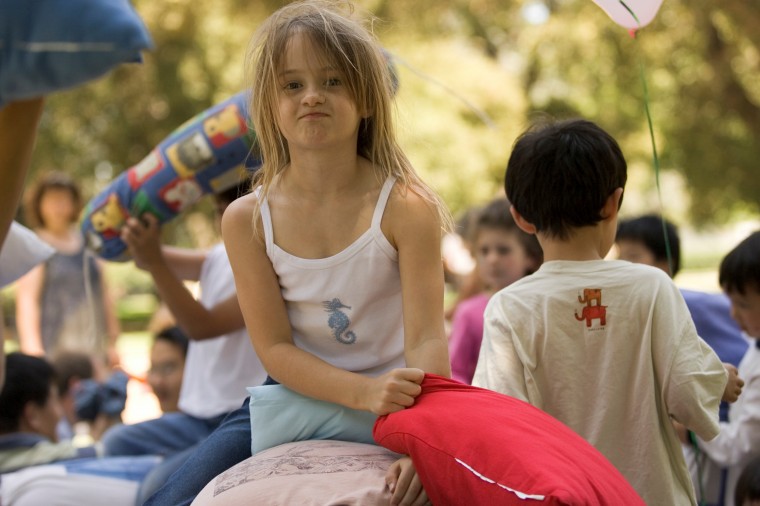 A. How smart of you to see difficulties arising, and to reach out now! And you are right, a child’s troubles in childhood can migrate into adolescence, if the feelings wrapped in earlier hurts aren't released with a supportive adult. An angry teen is usually a young person who has felt the need to hold their feelings at bay for a long time. And the environment most pre-teens and teens face in school and in society is far less than supportive. So over time, finding no one to listen to their feelings makes them feel isolated and, deep inside, frightened.

When our children tried to get their upset feelings heard, most of us parents did what the culture recommends. We tried to get them to stop crying, and to stop being angry. We told them their upsets were petty.  We excluded them until they could compose themselves. That’s considered sensible parenting, but it has the effect of walling our children off from the feel of our support. So when the fear and sadness they have stored since early childhood erupts, it is cloaked in anger because their feelings of isolation have created a thick shell covering the frightened, vulnerable feelings they need to express in healing tears and trembling anger.

Why she says, “You Never Listen To Me,”

Even if you were fortunate enough to understand early on that listening to your daughter’s upsets was healing, there are most likely still some feelings she’s been holding onto that have fermented into anger over time. These feelings are most likely rooted in her implicit memory, where there’s no conscious recall of the incidents that caused them to adhere there. She brings her upsets to you because you’re safe and you love her. The feelings morph into, “You never listen to me!” or “What do you care?” or, “Get out! You don’t understand, and you never will!” They float free of their anchor in early hard times, and glom onto you.

This is not fair or fun, but it’s no fault of yours. However hard we parents work at loving and guiding our children, we can’t and don’t do a perfect job. Our children need a listener to help heal the hurt, and often, the hurt they need to tell us about involves us, or is projected onto us from hidden early hurts. So it can become tricky to listen fully as they target us on the way to releasing the feelings that eat away at their happiness.

One possible move is to encourage her to see a counselor. Someone to talk to who’s outside the family can be very helpful. If she doesn't like the counselor after one or two sessions, find another. Your daughter will be able to tell pretty quickly whether the relationship will click and be useful to her. The credentials a person has won’t have much to do with whether your child will feel safe with them.

Ultimately, though, your daughter wants you to know and understand her feelings, and it's your attention that will be most powerful in helping her meet the many challenges of adolescence. The love you have for her is a powerful force for good. So bring your attention to her, even when you're not sure how best to do that.

The Power of Spending Special Time

Can you and she get away for an overnight together, something fun or adventurous? Can you start a regular Special Time for you and her, doing what she likes to do? At her age, that might be experimenting with makeup, going to a movie, trying out 20 pair of high heels at the shoe mart even though you won’t buy high heels for her for another two years. Ask, and see what she would like to set up. Be delighted with her during these times. Do not bring up sore subjects. Don't ask questions, don't pry, and don't refer to any of the difficulties in her life or yours. Focus instead on what a lovely child you have brought into the world, and on what she shows you about who she is and what she likes.

Then, when feelings begin to fly (and Special Time is guaranteed to make her feelings bob closer to the surface), pay attention and keep listening. Don't argue or try to reason. Just let her know you're sorry she feels so badly. She wants to cry and tremble, but she may have to blast away at you before she can open up such vulnerable feelings.

If she becomes aggressive, you will have to provide some physical limits so she can’t hurt you. When a child is close to releasing feelings of fear, she needs her listener to keep her from doing harm, gently but firmly. Her instinct is to fight for her life, and in that fight, she’ll cry, tremble, and perspire.

These are the signs that your daughter is actually healing the fear that makes her feel so alone and alienated. She will be fighting to offload big fears, but it will look like she's fighting you. So, if she’s trying to shut you out of her room, you can put your foot in the door before it slams, and let her push as hard as she can against you, crying and cursing you in the process. Or if she’s threatening to hit you, hold up a big sofa cushion between you and her, so that as she fights, she lands blows that aren't damaging. Or you could try to direct her to hit the back of the sofa as if it were you.

Expending physical energy can often help an angry person to finally release a flood of tears, trembling and perspiration, the signs that her mind is healing itself of fear. Your daughter won’t give you any indication that things are going well until she’s finished with this emotional episode, but if you can stay with her through it, you’ll see a big change in her attitude when it’s over. She’ll feel closer to you and much more relaxed. Your love will have gotten through.

It is incredibly difficult to remain supportive and caring while our teens tell us their worst feelings. They almost always have to tell us that we’re the worst, we’re hopeless, that we’re the cause of all their pain. They know where we hurt, and they hurl their upsets right at those places. Listening to them in order to help them heal is not for the faint of heart. It can take many tries to get through just the first five minutes of an emotional episode before our own angry reactions derail our intention to listen.

So I’ll suggest here that you find a regular listener for yourself.  We parents do need good emotional support in order to have a shot at listening well to our children. You can learn more about this in our booklet, Listening Partnerships for Parents, or our self-guided video course, Building a Listening Partnership.  A listening exchange can help you offload your own feelings about what your daughter says and does when she’s angry, and about the joys and the hard times you’ve had as her mom. Taking this step will help you become less worried, less angry, and better able to show your love for your daughter, even when you’re under fire.

Find out how children change as they head towards the teenage years with practical ways to supporting them in our free booklet Supporting Adolescents.

Get monthly advice and wisdom in our monthly email. Register here.