Staylistening Through Losing Butterfly Friends — and Human Ones

Kids really do know how to heal from their emotional hurts – if we can be there to listen and support them through the process.

Navigating group situations is challenging at any age, much less for a seven-year-old! I could see that this dynamic was taking its toll on my daughter’s emotions.

One day after school, her teacher told me that my daughter had come to her during the day and said, sadly, “I just lost my best friend.” It seemed one of the other girls had switched loyalties. I didn’t bring it up directly with my daughter; I did ask about her friendships in general, and she didn’t divulge much.

But that evening, and over the next few days, her behavior was often off-track. She was breaking limits, and we did a lot of Staylistening. I could tell that a lot was coming up – and out – through her meltdowns. As the days wore on, I began losing confidence that we would ever be done with it. Her behavior didn’t seem to be getting back on track. 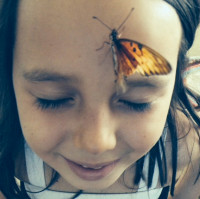 Then, one afternoon, about five days after the BFF breakup, my daughter found a beautiful butterfly outside with a broken wing. She named the butterfly Cupcake, and she walked around with Cupcake on her shoulder, finger, face, and arm. Then she made a little box with leaves and grass for the butterfly to rest. It didn’t seem that Cupcake would ever take flight again.

At first, Cupcake seemed unlikely to take flight ever again; a few hours later, though, Cupcake’s wing seemed to be healing. My daughter took Cupcake out of the box—and then, Cupcake disappeared! We looked around the living room, but couldn’t find the butterfly. Cupcake was gone.

My daughter’s face fell, and out came a deep sob: “I lost my best friend!” I gathered her to my lap, and she cried and cried – a sad, tearful sob about loss. I rubbed her back, and comforted her, “I’m sorry, honey. I know it’s hard to lose a friend.”

It was obvious that my daughter did some good healing through that cry. After that cry, something shifted in her: she became more cooperative, and she started listening better to limits she had been strongly resisting. Life at home went back to its more relaxed normal.

I know that my daughter’s butterfly adventure helped her process her human friendship struggles. At school, there are still friendship challenges, but her teachers tell us the girls are excluding each other less and playing together more easily.

By the way, we did find Cupcake again, a couple hours post-disappearance. Alas, Cupcake couldn’t fly very well after all, so my daughter put the butterfly back into the box. When Cupcake passed away the next morning, my daughter placed the butterfly in one of her special jewelry cases, which will probably be on her dresser a good long while.

She still mentions Cupcake every now and again, in a very sweet way, as if Cupcake had been a friend who moved away. As for me, I think of Cupcake with gratitude. 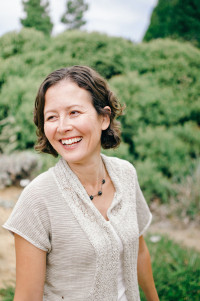 – Susan Derby is a Parenting by Connection Instructor based in Los Angeles, California. You can connect with Susan via email, or through her Facebook page.