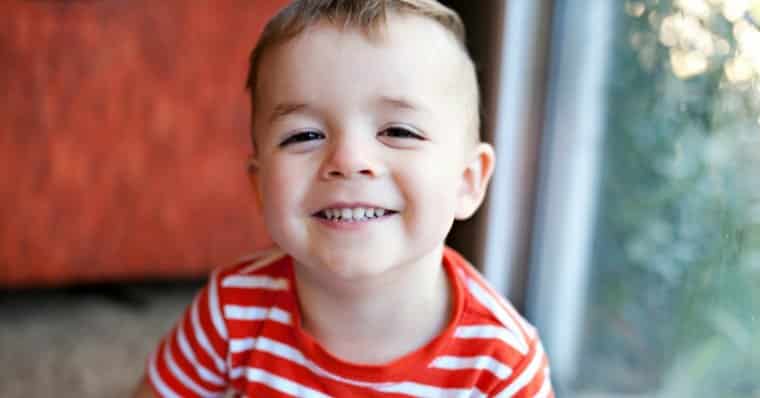 Jack arrived at 36 weeks, having experienced a foetal distress that sent his system into survival mode.

Doctors, acting fast, used vigorous suctioning in a stressful birth and it was soon discovered that Jack had respiratory issues that required a week's stay in the NICU.

There he was jaundiced and had difficulty feeding.

For much of his first year at home, Jack seemed to be in pain and unable to settle. He couldn't feed well, he arched his back screaming, his feedings were fraught with anxiety and his sleep disrupted.

His parents describe that first year as torture. Almost every piece of his clothing from that first 12 months has spit-up stains.

When Clinical Psychologist Maya Coleman met Jack he was three months into his Pre-K program, and things were not going well.

The majority of families that Maya works with are referenced to her when something going awry at school. “I work with lots of 3-5 year old boys hitting their friends, having difficulty regulating their emotions and their physical activity level,” she says.

Jack was no different.

At four years old Jack was hitting friends, running from teachers, and trying to leave the classroom when conflicts arose. Every transition was difficult for him. He cried tears of frustration when things didn't go his way. He refused lunch at school and spent the time running around while other kids sat and ate.

But it was when other parents complained about him biting, that his school decided to put him on a behavior plan. It seemed aimed towards moving him out. Jack's family connected with Maya.

Maya began using Hand in Hand's tools almost straight away. The listening tools promote connection that builds safety after traumatic experiences, such as Jack's troubled birth. The feelings that he had about that first year had been tamped down, and stuck somewhere in his system. The tools gave him a safe place to release.

They offer “a robust intervention for children that have had early adversity,” she says about the trauma-sensitive program.

First Step in A Trauma-Sensitive Approach

The first thing she recommended to Jack and his parents was 15-minutes of daily Special Time. Special Time, a one-on-one child-led playtime, gave Jack a way to absorb his parent's connection in concentrated bursts.

Maya also recommended that his teacher spend five minutes each day with Jack in their own Special Time, so that he got to know “his person” on the playground. Often the playground is a place where kids feel disconnected and have a hard time navigating their own feelings and other's behavior. His teacher, Maya thought, could ground him and provide additional safety.

For the first week Jack stayed close to her. And once he felt able to go off exploring at recess, he came back to her whenever he met with conflict. This was a marked changed in his usual behavior of fleeing or hitting out.

“He moved towards connection with an adult where he could be assisted in difficult times. It was a huge change,” Maya says.

Jack's parents were confused when he had major reactions to minor experiences, like a change in routine or times that required him to regulate. “He would have big responses to unthreatening actions, a clear, common indication that kids are carrying around the residue of earlier experiences,” Maya says.

Maya introduced a tool called Staylistening, and showed Jack's parents how to move in close and offer their attention and support during emotional moments. Again, the changes were quite remarkable.

At first, he would gripe and cry about the first issue, but his reaction deepened and changed if his parents moved in and got close. His cries reverted back to his baby cry, and he'd move in ways like he did when he was young.

“It might seem like things are going in the wrong direction, like he is panicking and getting more dis-regulated,” Maya explained, “but what his parents saw happening was Jack offloading emotions connected to the present, which then functioned almost like a a can opener, in the context of the warm attention and support of his parent, to allow offloading of the residue of earlier experiences.”

After these sessions, Jack was able to relax, settle and sleep in a way that he'd been unable too before.

Help for Parents and Shared Difficulties

Jack's parents were impacted by his difficult experiences and his mother found herself especially upset by the physical “fight” behaviors that would appear when Jack was frightened or overwhelmed. She worried about him becoming a bully and his flailing and kicking brought up recollections of a sibling that had attacked in the same way.

Maya offered Jack's mom had a trauma-informed tool for her own parenting using Hand in Hand's Listening Partnerships. Parents spend time listening and exchanging concerns, and this provides a place for adults to off-load their own feelings.

Special Time helped reestablish connection for Jack and his parents, while Staylistening and Listening Partnerships gave them support and a place to offload their own stresses and feelings. Next, Maya introduced Playlistening. Jack was encouraged to take a lead during play sessions, flipping the usual power dynamic.

One theme that arose during Special Time and was revisited during Playlistening centered around Jack putting Maya and his parents ‘in jail.' He would take a chef's role, preparing seemingly delicious pretend food that ended up being ‘rotted.' He delighted in their reactions as they happily took a bite and then spat it out in surprise and disgust.

“He would just laugh and laugh that he had tricked us and we had to cope with something so disgusting,” Maya says. “He had so much experience of having difficulties around food, it was sometimes painful to eat and people were often anxious about whether he would eat or was eating enough,” she says, “That it was no surprise that this hit the spot with the work he needed to do.”

His family noticed that after these play sessions he became significantly less picky and more open to trying new foods.

Hand in Hand's tools offer intervention for the family as a whole, Maya says.

Jack's family had been given no information about what to expect after his time in the NICU, advice on how to heal from the experience, or help with the fallout of him being uncomfortable for most of his first year. The tools helped them strengthen their connection with Jack, anchor him during high emotion, and increase his confidence and competence in school.

Hand in Hand's approach is in alignment with the Attachment, Regulation and Competency (ARC) model for trauma treatment and can be used across a wide variety of child-caring systems. ARC was co-developed by Kristine Kinniburgh and Margaret Blaustein, and initially grew out of the work the Trauma Center at JRI was doing within the National Child Traumatic Stress Network (NCTSN), a United States based consortium of sites dedicated to improving services for children and families who have experienced traumatic stress.

Read about our Professionals Intensive training here. Join us for a Q&A call with Maya Coleman and LMFT Robin Setchko as they talk about how the course works, how professionals are using Hand in Hand's tools, and how you could bring the tools to your work.

Read about how Hand in Hand tools work in the classroom