When one reasonable request doesn’t get through to our children, it’s time for an entirely new tactic. We propose the vigorous snuggle! 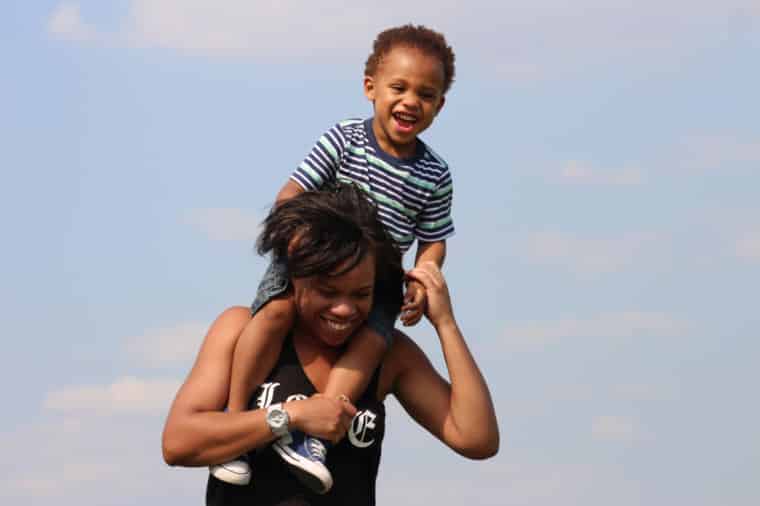 When children are caught up in a behavior that isn’t working for them or for you, we parents usually become serious and instructive. “Now, son, you know that’s not a nice thing to say, and I already asked you to stop,” or, “Sweetie, you can’t follow the cat around and pester him. He doesn’t like it. I’ve asked you to leave him alone.” This is what we do on our good days! And it’s a significant advance over “Darn you! Why do I have to tell you again and again! Go to your room!” or “That’s it. You get a swat! You just don’t listen!”

But in truth, neither approach really helps a child who is lost in ‘Unworkable Behavior Land.'

Pleading usually escalates sooner or later to a blowup, because it doesn’t work. And more drastic measures drive our children farther from us. In response to punishment, a child veers off into unworkable behavior more often. And if you set no limits at all, children have the same response: they resort to more flagrant and inflammatory behavior.

When one reasonable request doesn’t get through to our children, it’s time for an entirely new tactic. We propose the vigorous snuggle!

Read More: Find out what causes whining and how you can stop it in What's the Cure for Whining?

Or your child is pestering his younger brother, hoarding a toy that the younger one wants. You could go in and give a serious, “You don’t get to treat your brother that way” talk. But you have given that talk many times, and it doesn’t sink in.

It’s vigorous snuggle time! You break into a grin and say, “Come here, you!” in a cartoon version of your “I’m fed up with you!” routine. You grab the older child by the shirttail and pull him over, wrestling him into your lap for a playful pummeling or a shower of kisses or raspberries on his belly.

You’re doing what one might call a “limbic tackle.”

You can’t get through to your child’s prefrontal cortex, because he can’t feel his connections with anyone at the moment. He can’t listen to reason, so you do things his limbic system—the social center of his mind—can understand.

You make physical contact. You play. You act with warmth and humor. You stop the behavior he’s caught in, but you do it with nonverbal, generous “I want to be close to you” gestures.

But Where's the Respect?

Parents worry that if they move toward their children with warmth and humor at these behaviorally sticky times, their children won’t respect them, or that they won’t learn lessons of love, sharing, and thoughtfulness toward others.

It is our job to make sure our children become increasingly able to take the needs of others into account. But if we assume that children are built to love and built to cooperate, then we have lots more options as parents. Instead of thinking we have to teach so much, we can notice that a child is “off track,” and simply pour in some connection and some time for laughter or tears, to help get his or her emotional gears in synch again.

They convey acceptance. They convey a willingness to connect. They dependably heal the gaps children feel when school, or a half hour of meal preparation, or a phone call has interrupted their sense of connection.

And they improve our mood, too. Nothing lifts a parent’s spirits like a laughing, delighted child. Nothing makes us feel better than a child asking for the same snuggle-joke over and over and over again. In the eyes of our children, we’re geniuses when we use these tools. And getting good at meeting behavioral challenges with warmth helps us do better with grownups, too!

Unexpected Results From Play With Snuggles

My grandson is five and in preschool. He has caught the “I want to be first” fever that spreads from one child to another like the sniffles. When we do Special Time lately, he loves to play an “I win, you lose!” game with me. We have a little car track, and four little cars that go with it. He picks the car he is sure is the fastest, and I get to choose only a slow car. Only one car can go down the track at a time, and his rules are that only he gets to start first.

I am always, always second!

I moan and I get playfully exasperated when my car comes in second, and if he laughs or gloats, I dash over and wrestle him to the ground. He laughs and laughs. I say, “Don’t you laugh at my poor slow car! It’s a good car! It’s going to win some day!” and he gloats some more, and I wrestle him again. We have a great time with this game.

The other day, when Special Time was over, I did something I don’t usually do. I asked him to pick up a few of the toys we had spread around. He lay on the floor and said, “I don’t like to clean up!” I snuggled him again: “Come here, you! You Never Cleaner Upper, you!” and wrestled him around some more. I kept the game going by saying expectantly, “I’m sure you want to pick up this ball!” and I’d hand him the ball, and he’d throw it away. More snuggles and pummels and laughter. We played this for maybe five minutes, and then I let go of the idea of cleaning up together.

I was out of time, and didn’t want to get officious about cleaning. I didn’t feel like putting us through that. The mess wasn’t big.

The next day, he came over to play. The very first thing he did was to pick up a blanket I had thrown on the carpet. He folded it and put it where it belonged. He picked up some shoes that had been left in the kitchen, and put them in the shoe rack. He neatened up the magazines on the coffee table. He put some books away. And he asked me if there was anything else he could clean.

The rewards of our playful snuggle about cleaning came a day later, but were very sweet to see.

Get closer to your child in just five minutes a way. Show me how.