Helping My Son Sleep in His Bed 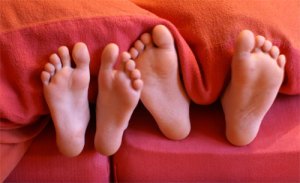 The night before last my almost 3 year-old, the youngest of my three boys, awoke at 4:30am crying and very scared.  He kept asking, “Is someone gonna come?” He had watched Kung Fu Panda with us earlier that day, a movie that he's seen many times and likes, but this time it seemed to get to him – at least subconsciously.  I had gone to sleep very early, and actually wasn't so tired when he awoke.

Something similar had happened about a month earlier where, after watching something that didn't seem to scare him in the moment, he awoke scared in the night. It was a week where I was not rested, so when he woke up and came to our bed, I just cuddled him up and we both fell instantly back asleep.

The problem was that this went on for several days, and I was starting to feel resentful – not to mention exhausted. My husband was also moaning about how he was falling off the side of the bed. All in all, this “solution” was not working for 3/5 of the household.

So, the night before last seemed the perfect night to put my limit setting to the test. When my youngest woke up and wanted to come to our bed, I said in a loving tone, “No. I'm going to go sleep with Aba (dad), and you are going to stay here in bed with your brother.”

The terror and tears came flowing out. “No! I want you to stay with me all night!” I tried laying him down in bed and lying across the bottom of the bed, holding his hand. This quieted him, but no matter how long I waited before gently removing my hand from his grip, he would sit upright, call my name, and grab for my hand. I realized this was not going to get me anywhere. A couple of times, I did “escape”, but no more than a minute later, he would show up at my bedside again wanting to sleep with us. I took him back to his bed and repeated that he was going to sleep in his bed and me in mine, and, again, the tears flowed. (This is all, by the way, being said in a very loving tone.)

I sat on the edge of his and his brother’s bed and held him as he screamed and cried that he wanted to sleep with me. Then he quieted down and explained very creatively that I should get in bed with his brother and that he would go sleep with Aba. Uh, nice try!

Again, I set the limit and he cried and screamed. He actually woke his oldest brother in the bed next to us (my kids don't wake for anything), and he was very sweet telling his little brother he could come sleep with him. But my youngest would have nothing of it. I just kept holding him and he kept crying and screaming for a whopping two hours. At 6:30 am he fell asleep in my arms, I laid him in his bed, and went back to sleep. I felt great knowing that he had been able to shed all that fear, and even greater when last night he slept right through as he usually does.

PrevPreviousCan the Research on Attachment Make Us Better Parents?
NextMy Child Stopped Drawing: How to Help a Child Regain ConfidenceNext