Refusing Medicine: Now I Don’t Have to Force My Child 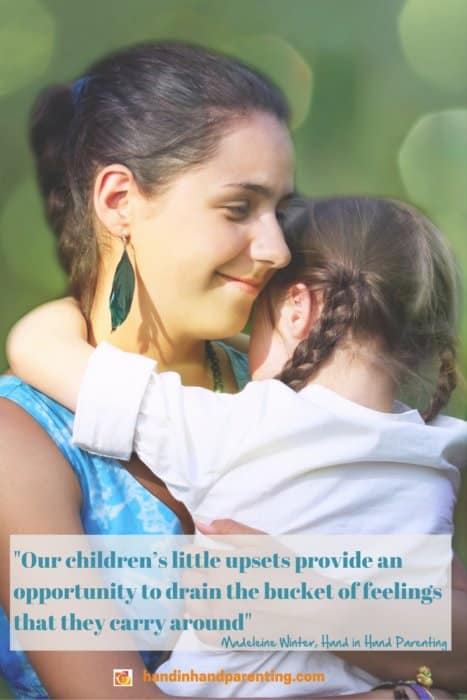 Recently, one of the parents in a Parenting by Connection class I was teaching sent me this story about a success with Staylistening to her boy. Staylistening is where we stay close with a child who is upset, listening without comment, judgement, criticism or harshness. We make sure that everyone is safe, but we resist the temptation to “fix up” whatever the problem is, at least until we have given our child a chance to release the feelings connected with it. After releasing the feelings, children are often able to return to their sunny, enthusiastic selves, almost as if the difficulty never happened.

Many common struggles, like this mother’s struggle to give her child medicine, are actually about other, more difficult issues. We may never know what these issues are, but our children’s little upsets provide an opportunity to drain the bucket of feelings that our children carry around, which then leaves them free to get on with enjoying life. In situations when we need children’s cooperation, Staylistening resolves the tension children feel and reduces resistance. Here is this mom’s story.

“Recently my son, who is two years old, had a fever in the middle of the night. We put him in a cool bath and tried to give him medicine. Giving him medicine has always been a real struggle in the past – we have had to hold him down.  Having to fight over it like this has always made us, and him, feel awful.

“The day before, I had talked with my husband about Staylistening– about not forcing things, and about letting the children show how they are feeling.  So, when we decided to give medicine for my son’s fever, I wanted to try something different. My husband was worried about letting my boy cry about taking the medicine and wanted to force him to take it, but I convinced him to give it a try.

“So I took a deep breath and said to my son, “I’m sorry in the past I have felt that I had to force you to take this,” and just held out the syringe with the medicine where he could see it, but did not try to make him take it. He started to cry hard. When the crying quieted down, I brought the syringe where he could see it, and asked “Are you ready to take this now?” And he started crying again.

“After a long time of crying (maybe 1 ½ hours), we decided that it was really time for him to take the medicine, and I apologised to him as I gave it to him. He still cried, but not nearly as hard as earlier, and I did not have to force him to take it; he let me give it to him.

“Listening to him through all that crying was not easy. Hanging in there for an hour and half in the middle of the night was hard, especially since my husband was not so sure it was a good idea. But I kept thinking that this was probably crying about a deeper hurt. As he cried, I felt sorry and guilty. But then as the crying got less and less, I could tell that we had done the right thing by Staylistening to him.  I feel a great sense of relief that I don’t have to force him anymore when he needs to take medication.”

– A mother in Sydney, Australia

Find out how play helped this child's fear of vaccines

Find out about the tools in The Five Tools, What They Are and How They Work