The Simplest, Happiest Way to Connect with Your Kids

In his book, Playful Parenting, Lawrence Cohen says, “Play can be the long-sought bridge back to that deep emotional bond between parent and child.” Play invites adults into a child's world, on their terms, and the giggles and laughter that follow releases tension, and helps barriers fall away.

Sushila Hart, a nanny and instructor with Hand and Hand Parenting, saw how some simple roughhousing play brought her closer to the trio of children she was taking care of, and who she was having difficulty interacting with.

The boys – especially the 11-year-old – is very resistant to talking or engaging with me in any way and he is often sullen and serious. 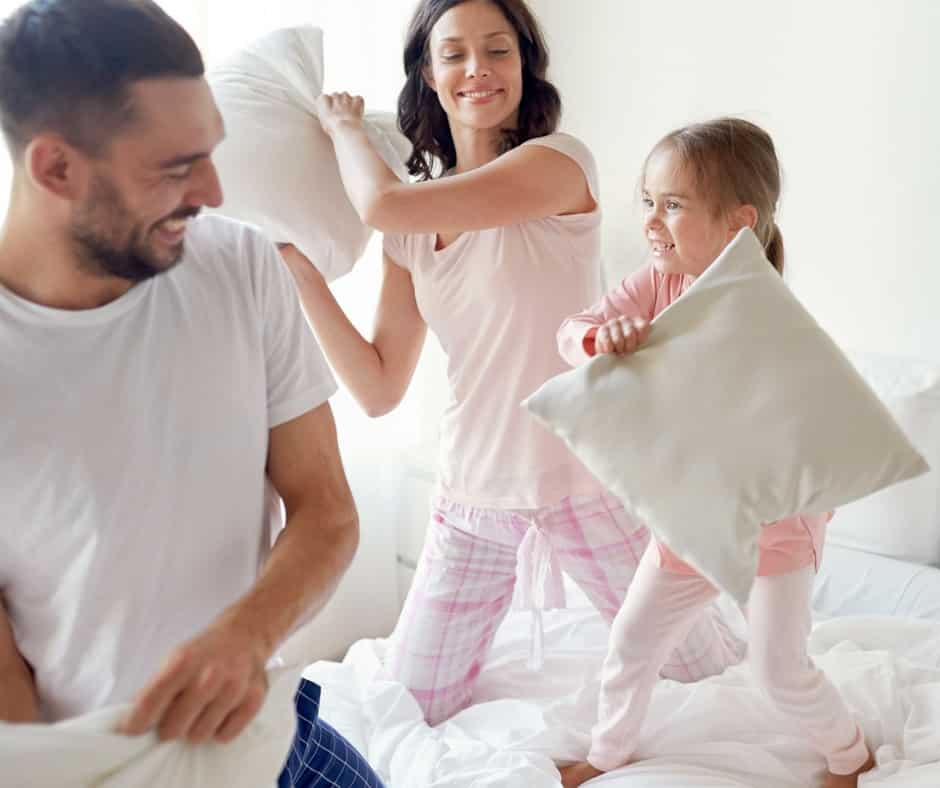 The other day the girl and I were playing in her room and I suggested that we have a pillow fight.  Of course, she thought this was a great and fun thing to do, and she thoroughly enjoyed beating me up!

In the middle of our play, the 11-year-old boy appeared, wondering what all the racket was about.

I invited him to join in, although I completely expected him to refuse and leave the room.

Instead, to my surprise, he said “Sure!”

Then, his brother showed up and joined in too!  Everyone was laughing and having a good time.  And, later, when his dad came home, I heard the oldest boy tell his dad that we'd had a pillow fight and that it was so much fun!

The next day when I came to work, the 11 yr. old boy looked up and said “Hi,” to me – he had never done that before!  I was even more impressed when he allowed me to sit next to him and watch him while he was playing a video game, and answered my questions about what was taking place in the game.

The pillow fight broke really broke through some barriers that were there between me and the boy, and is yet another reminder how connection and laughter can really bring the closeness that we all crave.”

Roughhousing can help bring connection and co-operation in lots of difficult parenting challenges. You can read how this mom turned to play when her child had a hard time with math homework. Roughhousing Helps my Daughter with Math.

It can be hard to let go, and let children really take control of their play, but connection flows much faster when parents let them lead. One dad describes how he learned to let go when he roughhoused with his children in Play That Lets Children Lead.

Sushila also talks about how play created safety with an adopted boy she cared for.

And talking of dads. Some find the concept of connection parenting difficult, but roughhousing often comes more easily to them, and can be a great introduction and bonding experience. Horsey, piggy-backs, animal chase, tag, pushing hands together all work – in fact, anything that brings on laughter will open the doors to reconnection.

Play is one way to reduce stress in your parenting, get four more in this free guide: 5 Revolutionary Ideas That Make Parenting Less Stressful.