Staylistening at Bedtime: Letting a Child Have Feelings About Separation

Eventually I said, "OK, you go to sleep now. Do you remember that I love you?" He said, "OK! Yes. Do you remember I love you?" I said yes, and he yawned. I sat for a few more minutes and asked him a couple of more times if he remembered that I love him. He said yes and was quiet. Less than 10 minutes later I went in to check on him as promised, and he was asleep. I kissed his cheek. He opened his eyes a bit and nodded when I asked if he remembered I loved him. And then he went back to sleep.

My 5-year-old has always been clingy with me, especially at bedtime.  Tonight I decided I would do StayListening at bedtime.  I sat with him for awhile, and we chatted and giggled.  The whole time he worried about me leaving though.

He would ask every time I changed my sitting position, “Are you leaving now?”  And he would say, “Please don't go.  I don't want you to go. You're mine.  Nothing of mine can leave.” 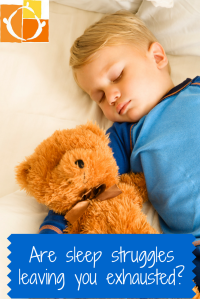 When I'd say I was leaving, he would climb on top of me and say, “No, I don't want you to leave.  You have to stay.  If you leave, you won't ever come back.  Then I can't see you.  I want to see you all day, and all morning, and all night, and in the afternoon, too!”

No amount of, “I always think about you when I'm not with you.  I'll still love you even when I'm not here.  I'll come back in just a bit to check on you.  Even when you fell asleep, I always come to see you and check on you,” helped with his separation anxiety.

So I kissed him good night, and pried myself, legs, then hands, away from his hold, and left his bed.

Staylistening at Bedtime: Listen to Him Cry

He sat at the edge of the bed and said, “You'll be right there?  You won't leave? You have to stay!”

That's when I realized I wasn't quite far away enough for him to work through all the feelings.  So I said, “I'll be here for a while, then I'll leave.  Do you know I'll always love you?”  He said, “No I don't.  I'll forget.”  I guess I shouldn't have been surprised, but I was a bit taken
aback nonetheless.  I assured him, “I will always love you, even when I can't be with you.”

Then he surprised me with, “Even when we are dead?”

I've known that he's been working on fear issues with death since he found out about one of my miscarriages about a year ago.  He became fascinated with death especially after having been introduced to Van Gogh's art and life at school.  The death question hadn't come up for a few months.  And I was really surprised that it came back in a moment like this.  But I said, “Yes honey, my love will still be with you even when we're dead.”

“My love will still be with you even when I can't be with you.  Will you remember that I'll always love you?”  (More tears on my part.)

He became upset again and cried, “But then I can't see you.”

When he calmed down eventually, I waved goodbye to him.  I sat outside his door and closed the door.  He cleared his throat, I cleared my throat.

He giggled, I giggled back.

He coughed a bit, I coughed, too.

There was more laughter now, and he started clapping.

He laughed a few times then said he didn't like it.  So I stopped echoing him.

He signalled a few more times and I didn't reciprocate.  Then he said, “I like it now.  Do it again!”  So we went back and forth on it some more.

I sat for a few more minutes and asked him a couple more times if he remembered that I love him.  He said yes and was quiet.

Less than 10 minutes later I went in to check on him as promised, and he was asleep.  I kissed his cheek.

He opened his eyes a bit and nodded when I asked if he remembered I loved him.

And then he went back to sleep.

A Less Stressful End To The Day

The whole thing probably took an hour, which is no more than if I had stayed with him, or just left him.  And it was a lot less stressful for both of us.

I felt like I knew what I was doing.  And he went to sleep calmly by himself.  I hope his anxiety about separation (and maybe death?) is a bit relieved, too.

The next night we went through this again, but the session was shorter.  Over the next few weeks, it became a ritual that I'd sit outside his door while he fell asleep.

Sometimes he would come out and drag the chair over for me.  Other times he would agree that I would do work or wash dishes instead of sitting by his door.

Occasionally when he had trouble falling asleep, he would come out to make sure I was still there and get a hug.

Then he would go back inside, leave the door ajar just a bit, and get back in bed and go to sleep.

I still stay with him to chat for a bit in his bed after our bedtime stories. Occasionally I fall asleep while snuggling with him! But overall, bedtime had been much less struggle for both of us.

~A Parenting by Connection Instructor in California

Lean into bedtime. Listen to our podcast on Handling “Go To Bed” Battles

Learn why children find nighttime so difficult and useful strategies for easing stress around bedtime in our Helping Your Child Sleep online class.