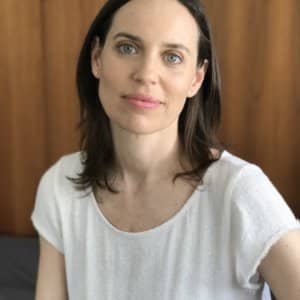 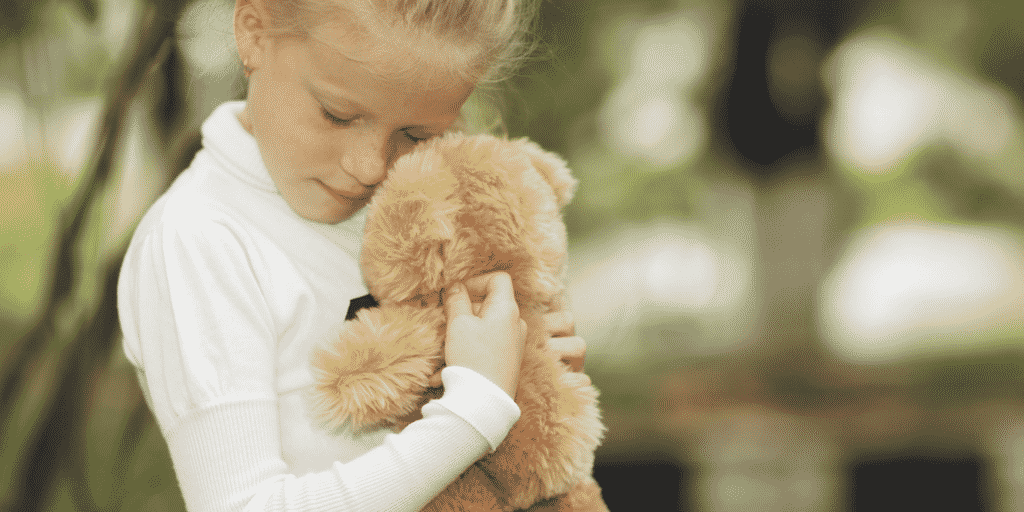 Many children are afraid of visits to the doctor, but my daughter was TERRIFIED.

She’d had a difficult birth and was in the NICU for four days; perhaps those early experiences had stayed with her. She would become terrified in the examining room, trembling, screaming and clinging tightly to me even in a routine examination of her ears and nose.

In the early days, I would hold her down while the doctor gave her whatever medical attention was needed but it didn’t feel good for either of us. I wanted to find a way to help her truly recover from whatever was scaring her so much.

Managing fear takes significant psychological effort and can be quite taxing. During the most significant years of brain development, we want children to have as much access to the parts of their brains that are eager to explore new experiences as possible, taking in new information without being shackled by fear and worry. I wanted to try a different approach that might improve our experiences at the doctor’s office.

Flu season was rapidly approaching and I wanted my kids to begin getting the yearly-recommended vaccine. My twins were 3 and a half at the time. My son hopped on the table and presented his arm no problem but when it was my daughter’s turn, as usual, she began howling and clung to me with all her might.

Instead of forcing her this time I said, “It’s okay if you’re not ready. We can come back and do it another time”.

She leaped into my arms and we left.

I made the appointment for two weeks later in the hopes that this would give us enough time to work through her fears.

These are the four steps I used to help her resolve the fear she had around the doctor’s office.

1. Staylistening – Hearing Her Upsets Through.

That evening, and every day up until our appointment, I reminded her that we would be going back to the doctor’s office to get the shot.

I brought up the topic when we were in a calm situation and when I knew I could give her a lot of my attention. Usually, this was in the evenings around bath time. I introduced the syringes used to measure children’s medicine into our bath toy collection and told her what to expect.

“Look this is how the shot works. The medicine gets sucked up in here and then a needle goes here and when the needle pokes into your arm it squirts the medicine inside your body,” I told her.

I talked her through all the details, describing how a nurse would clean it first with cold alcohol and then pinch her arm before putting the needle in.

In the clinical world, we call this exposure therapy and its considered one of the most effective ways of treating anxiety.

During these times, my daughter would listen intently and often cry or whimper. I looked into her eyes and listened. Research shows that supported crying leads to a raft of beneficial physiological shifts, so if a child, or anyone, can express their tears while being lovingly tended, they can essentially wash away emotional tension. 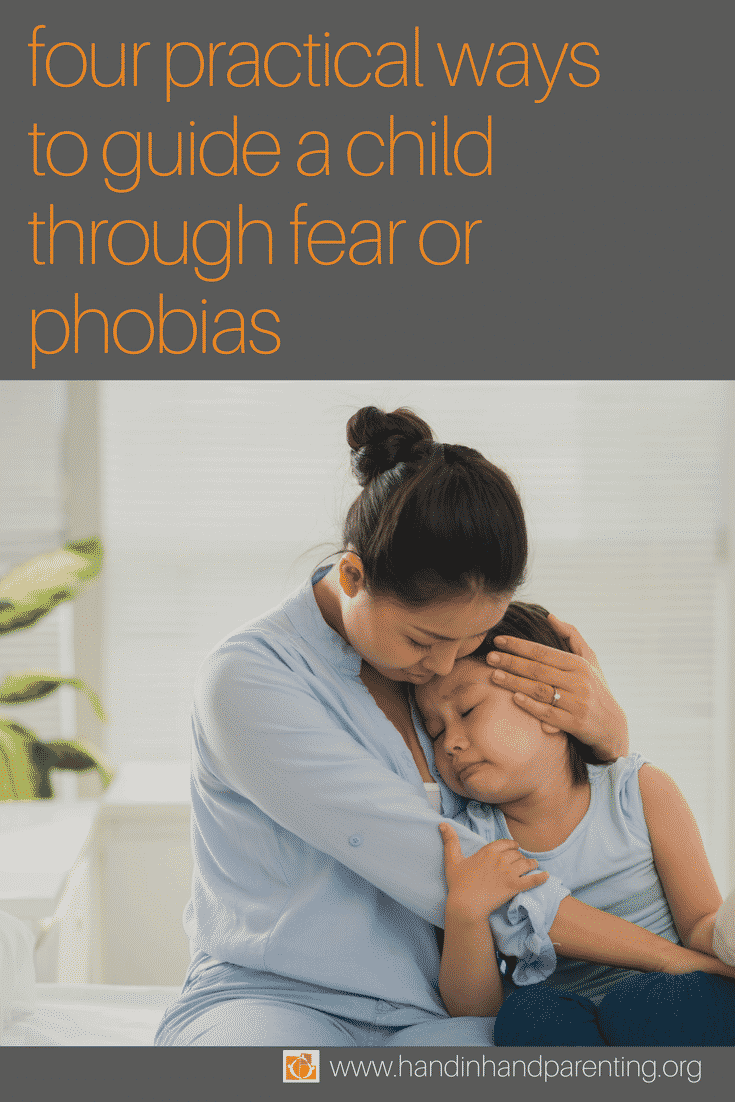 Laughter and play is another wonderful way for children to relieve stress. I knew getting big laughs out of her would help relieve her tension around the vaccine and so I often pulled out a toy medical bag with a pretend shot and said, “Hey, what should we do with this thing? I want to help you be less afraid of your shot.”

She didn’t show much interest in the toy, so I encouraged her a little, saying playfully, “But don’t try to give me a shot with it – I’m too scared!” Then ran to hide behind the sofa. She smiled a little and followed me with interest, but didn’t keep the game going for long.

A child’s resistance to play and laugh at an invitation as open as this usually indicates deep-seated fear. I kept offering the invitation in a few different ways. In the evenings at bath time, I would fiddle around with it as though I didn’t quite understand how it worked. Playing the inept fool often inspires confidence in little ones and is a hallmark of the Playlistening tool.

Once I accidentally “discovered” that I could squirt water out of the syringe!

Initially, her fear kept her from being too interested, but eventually, after a day or two she wanted to try it herself. When she squirted me with water I cried out mockingly, “Oh no! Get that thing away from me –it’s too SCARY!” she started laughing and continued to squirt me even more. Then she suddenly stopped and said, “Now I want you to be a grown up getting a shot.” So I switched gears and calmly received her “injection”. Next, she asked me to be a “little girl” getting a shot, so I began to act afraid again and wouldn’t let her do it. This time she started to laugh a little, and soon she was exploring all the different ways she could direct my response.

At one point she wanted me to be afraid, yet still accept the shot she gave me. In this way, I continued to let her lead the play and tried my best to follow her increasingly precise directions.

The night before our scheduled appointment she was definitely in a heightened emotional state. Everything was upsetting to her. I kept setting firm, but loving limits that served to induce a lot of crying and eventually some physical pushing against my body. When it was time for her to put on her pajamas she flatly refused and wrapped herself up defiantly with a picture book. I kept reminding her gently while searching for eye contact that it was time to put the book away and time for pajamas.

Every gentle reminder inspired deep, passionate responses from her, but I kept setting up the expectation that she needed to put on her pajamas and that I was in no rush.

I knew that this struggle had nothing to do with pajamas and everything to do with her need to release the stored up tension and fear she was holding so tightly inside. Luckily, my husband was home to tend to our son so I could provide a very spacious and accepting environment for her to release.

I said very little but I was continuously thinking, “Take your time honey, you are safe with me, you can get this out of your system in any way you need to.”

She took full advantage of my silent offering and for the next 45 minutes screamed like a soul in torment as I stayed close, loving and warm. She pushed, shoved, grunted and flailed about, eventually collapsing into a sweaty heap on the floor. She looked like a limp doll and it was clear that tons of emotional tension had been released from deep storage within her body. After a while, she said, “Pick me up!” I did just that, and kissed her and told her I loved her. I offered her some water and made no mention of what had just happened. We just carried on with an abbreviated version of our bedtime routine, including putting on the pajamas. She fell into a deep sleep very quickly afterward.

4. Listening Partnership – Examining My Own Feelings On Phobias Helps Resolve My Tension Too

If your child has any kind of phobia then my first piece of advice is to find yourself a good listener. Let yourself vent to a kind and patient friend. Talk about how inconvenient, exhausting, embarrassed or overwhelmed the phobia might make you feel. Then try to remember how your fears were managed when you were little. What made you scared? How did you manage it? Did anyone help you with it? Did anyone let you down?

I was able to talk to my own listening partner all about how terrible it was for me to see the fear and agony on my daughter’s face when we were at the doctor’s. It reminded me of those difficult early days when she was in the NICU and I feared for her life. She was so tiny and hooked up to all those machines. Ugh. I wanted to forget all about it but instead, I talked through everything I could remember. I wanted to make sure I was not holding onto tension that could be getting in her way.

Little ones struggling with fear need us grown-ups to remain calm and even-tempered. I used my listening partnership to explore my doubts about this elaborate and time-consuming plan to help her get over her fear of shots.

Would it even work?

I let myself vent on four different occasions for about 30 minutes each over the course of those two weeks.

On the morning of our scheduled appointment, I asked if she was ready to get the shot and she said, “Yes”.

She asked me to carry her into the office, and so I did. When the nurse entered the room my daughter was already sitting calmly on the table.

I encouraged her to look away, but she didn’t.

She looked right at the needle and watched the nurse inject her. Afterwards, she cried for a short moment before suddenly realizing what she had just accomplished. She was bursting with pride! She marched around all day showing everyone her band-aid, which we proudly left on for what was certainly an unsanitary length of time!

Fighting Through the Fear Promotes Resilience

I noticed several differences in her confidence level and playfulness after this important event. She laughed more readily and was all around more animated. In fact, that night I noted that her play with the toy syringe was much more relaxed and her laughter more exuberant.

Instead of settling into her usual comfort zone of retreating to picture books and repetitive coloring, she instead chose to play with building blocks and engage with her brother. A few days later at our local park, she dropped to the ground from the monkey bars–something she had been afraid to try, despite my encouragement.

These same steps can be followed to help a child with any kind of specific fear, whether it's flying on a plane, riding in elevators, dogs, or particular foods. In my practice, I’ve supported many parents with young children through similar processes and with similarly great outcomes.

As an added bonus I often find that other troubling behaviors are either diminished or even relinquished entirely by this process.

No question, it takes some effort up front, and your child probably will not thank you for it, but I suspect that his or her increased sense of confidence and pride after overcoming a big fearful challenge will be all the satisfaction you will need.

Parents and professionals are using Hand in Hand's powerful tools

Learn more about the four tools Savannah used, plus one more in Learn Five Tools That Will Transform The Way You Parent and in the book Listen: Five Simple Ways to Meet Your Everyday Parenting Challenges

Create a trauma-informed program for your setting on the Hand in Hand Professional’s Intensive. The 8-week intensive course for professionals working with children introduces you to Hand in Hand's five powerful tools and guides you in applying them to your program. The course offers 20 CEUs. Find more details and register here.

Savannah Sanfield is a licensed child and family therapist, certified Hand in Hand Instructor and mother of two children, one (formally) afraid of medical settings. She is based in Los Angeles and specializes in issues related to early childhood development for both parent and child. Visit Savannah's website here.