When my son was about 21 months old, he started to hate having water poured over his head when I washed his hair in the bath. He would scream and scream every time, even when I was meticulously careful not to get any suds or water in his eyes. 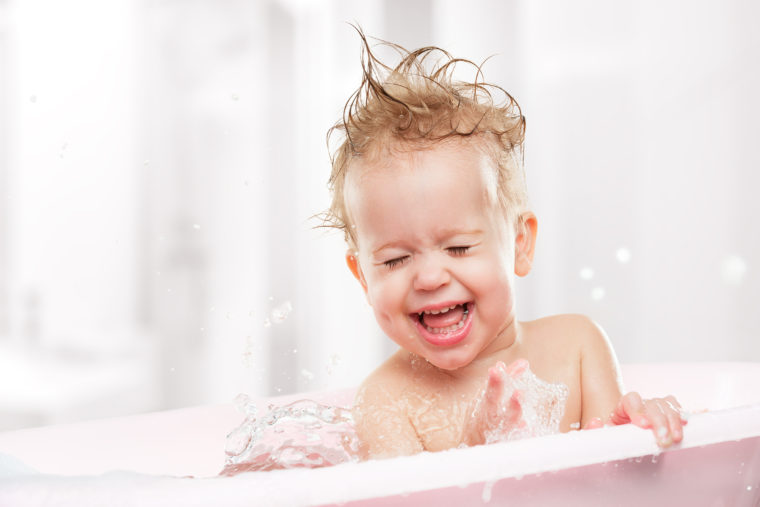 After a few weeks of this battle, I remembered what Hand in Hand Parenting's founder Patty Wipfler says about Playlistening. Using play can bring down fear barriers through a child's laughter, and roleplaying the fear is one strategy to try.

One night, during his bath, but before washing his hair, I took the special hair-washing cup and (discreetly making sure it was empty first!) held it upside down over my head. I shrieked, pretended to cry, and shook my head back and forth. My son howled with laughter!

He kept handing me the cup over and over again with a big smile on his face, and he laughed uproariously as I feigned intense distress. In between mock cup-pourings, I would smile at him to let him know I was okay. Gradually my hair got wet from the traces of water in the cup, and he was fascinated to touch my wet hair and rub the top of my head, which was now quite wet.

Later in the bath, when I washed his hair, he clearly did not enjoy it much, but he sat still and did not actually scream. Over the course of the next week or so, I always preceded washing his hair with play-washing mine, complete with loud shrieks and cries. He continued to laugh with abandon, and touch my wet hair with fascination. Now he has taken control of the cup, and insists on being the one to hold it over my head! It took three or four baths, but now he does not object to his hair being washed. In fact, what was once a torture session for both of us, is now one of his most gleeful games. In the evening when I say, “bath time!” he runs into the bathroom to get the cup, and runs over to me with it, laughing and holding it out to me!

– A mother in Pacifica, California

Find out how to use Playlistening to transform picky eating, letting go of a pacifier, and whining.

For more playful, practical parenting get our monthly newsletter. Sign up here!